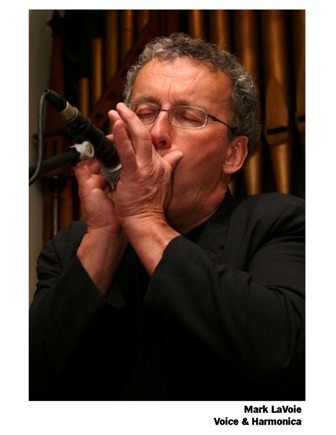 Mark LaVoie has been playing harmonica, and performing for 40 years.

His Solo-Voice & Harmonica Performance, is a unique acoustic style, that is reminiscent of the late Great! blind  Legendary harmonica player Sonny Terry.

Mark was his driver in the summer of 76, and  is a protégé of Sonny Terry.Below is a comment from Sonny that he will never forget, and has taken to heart.

“Mark, you have your own style, take something from me, but play it the way you feel it”

Mark  is one of the distinguished harmonica players, listed on Hohner Harmonicas Endorsee, Artist page.

Since 2008, this distinctive blues roots duo’s CD, has aired on Dan Aykroyd’s Hours of Blues Radio Hour,  featured on BB Kings Bluesville XM74,” Picks to Click” for 8 weeks in 2008, and the CD is still being played often on XM 74.

The video’s of this performance can be seen on Youtube.

They were also in the Artist line up, on one of the most prestigious blues events that happens twice a year, The Legendary Blues Cruise in January 2012.

The Mississippi Valley Blues Festival in 2010,  and show case performances since 2010 in Memphis Tenn. during the week of the Blues Awards, which has put them on the Radar of the International Blues Scene.

They received a standing ovation for their performance in May of 2012 the week of the Blues Awards, at the Lousianna Red memorial tribute at the Hard Rock Cafe, performing one of Reds Songs, “Sweet Blood Call”

One of Mark’s favorite activities is teaching harmonica to college students,( all ages) young & senior citizens. He has given workshops and lessons in private schools, high schools, colleges, and recently on the Legendary Blues Cruise. Locally he performs his Solo-Voice & Harmonica performance, and also with his Legendary Duo-“Cooper & LaVoie”