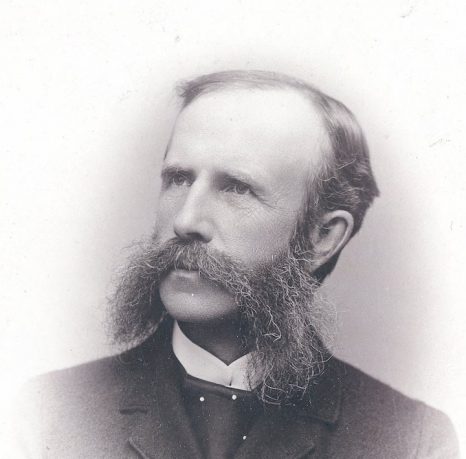 Ezra Brainerd (1844-1924) was born at St. Albans, Vermont, Dec. 17, 1844. His early life was spent in that town, where he received his preparation for college. Through the influence of the Rev. Dr. J. E. Rankin he was led to enter Middlebury College in the autumn of 1860. He graduated in 1864, receiving the first honor, and was immediately appointed tutor for the following year. There is but one other instance in the history of the college of the appointment for a student to the position of instructor for the year succeeding his graduation. After serving for two years as tutor, Mr. Brainerd entered the Theological Seminary at Andover, Mass., where he graduated in 1868. He was at once appointed to the chair of Rhetoric and English Literature in Middlebury College, left vacant by the resignations of Professor Brainerd Kellogg, who had been called to the Brooklyn Polytechnic Institute. He filled this position until 1880, when he was made Professor of Physics and Applied Mathematics.

Ezra Brainerd married twice.  He married Frances Viola Rockwell on December 1, 1868, and they had five daughters and a son.  On December 25, 1897, he married his second wife, Mary Wright, with whom he had two more daughters.

In 1885, upon the resignation of the Rev. Dr. Cyrus Hamlin, he was appointed temporary president by the Board of Trustees, and on April 17, 1886, he was elected eighth president of the college. During his tenure many improvements were made to the college buildings and grounds. The chapel building was repaired and equipped throughout with steam heat. Painter Hall was greatly remodeled and heated in the same way. These improvements together with the introduction of electricity were the most substantial elements of progress that Middlebury College had seen for many years.

In 1888 the college received its first practical aid from the State. By the terms of the law passed at that time $2400 are allowed the college each year to pat the “tuition and incidental expenses of thirty students.” In 1890 radical changes were made in the curriculum, electives being offered and a system of “honors” established. The need of a new library had long been felt and in 1897 a legacy of $50,000 received from the estate of the late Egbert Starr made it possible. The Egbert Starr Library was dedicated in 1900. A memorial gift from Ezra J. Warner, Class of 1861, in honor of his father, Joseph Warner, once a trustee of the College, resulted in the construction of Warner Science Hall in 1901. Warner was Middlebury’s first building consisting only of classrooms, with large well-lighted rooms and a lecture hemicycle. The increased number of young women in attendance necessitated some provisions for their accommodation and through the generosity of several friends of the institution the large dwelling house built by president Kitchel and purchased by the college with funds bequeathed by Hon. Joseph Battell of the class of 1823, was fitted up for their use.

In addition to his presidential duties, Brainerd was a distinguished scholar in the Natural Science, and made several important contributions to the Botany and Geology of Vermont. In 1887, he was one of the three commissioners appointed to revise the school laws of the State of Vermont. In 1888, he received the degree of LL. D. from Ripon College, Wisconsin, and the University of Vermont, and in 1900, received the degree of D.D. from Howard University in 1900. Brainerd resigned as President of Middlebury College in 1907. He was elected a Trustee of the College in 1908 and served in that position until his death in Middlebury on December 8, 1924.

Received LL. D. from Ripon College, Wisconsin, and the University of Vermont, and in 1900, received the degree of D.D. from Howard University in 1900.