The day would begin like most any other in Collinwood, Ohio, a rapidly industrializing suburb of Cleveland.

Mothers would shuffle their children off to school, to the stately three-story building—just six years old—with its impressive masonry façade, its arched doorways, its high windows. The children, about 370 or so, would trundle into the Lake View School, their footsteps and laughter echoing throughout the building as they tramped across the yellow pine floors—floors that gleamed due to the kerosene used to clean and polish them—and rushed up and down the grand, open front stairwell that rose from the basement all the way to the attic.

Lake View School was aesthetically impressive to behold; only later would the architects of the building admit that it was designed for tragedy.

At some point that morning, there was a spark. That spark led to flame. And that flame led to conflagration.

The school had just two exterior doors; one was blocked by fire, which left a lone opening to serve as the main point of egress for the nearly 400 inside. First responders—mainly the parents of the schoolchildren, who rushed to the building as word of the fire spread—would later speak of desperate attempts to free children from the massive pile of bodies that filled the only exit.

There was no hope to extinguish the blaze. Though there were plenty of cars in 1908, Collinwood’s fire equipment was still drawn by horses, and when the fire broke out, the town’s service animals were hitched to road-grading equipment, smoothing dirt roads more than a mile away. By the time the volunteer fire department arrived, it was too late to do anything but stare in horror. Less than an hour after the first spark, the fire in Collinwood had brought down the Lake View School.

About four or five years ago, Michael Newbury was researching disasters in America at the dawn of the 20th century. The American studies professor was particularly interested in how stories of these disasters—earthquakes, hurricanes, industrial accidents—were told, and he thought that perhaps his research would lead to a book of essays, a cultural history of disasters. He had been spending a little bit of time learning about an explosion at a flour mill in Minneapolis in the late 1870s when a document trail led him to another Midwestern tale, one that unfolded a quarter century later: the Collinwood fire.

Newbury was stunned. A Midwesterner himself, the Chicago native had never heard of the Cleveland disaster, even though the subject matter, the era, even the location were all areas of his scholarly interest. He quickly discovered why this was: the only professional scholarship on the fire is a 20-page pamphlet produced by the Cleveland Public Library in 2008, the Collinwood fire had escaped the scrutiny of scholars for more than a century. So Newbury turned his gaze toward Cleveland.

Collinwood, Newbury discovered, had everything he was interested in. There was the tragedy narrative, of course—172 children incinerated in a preventable accident. But it was also a story of industrialization. A story of immigration. A story of sensationalist mass media. And it was a story that had not been examined or told, at least significantly, in 100 years.

“That’s a rare thing to find.” Michael Newbury and I are talking in my office in late November, and the wan smile he offers when speaking of this unlikely discovery is in keeping with a personality that can best be described as chill. Newbury has slightly sunken eyes, with a shadow of dark rings below each. His hair is tufted and white and never quite in place, though it’s not entirely disheveled, either. He speaks smoothly and is quick to laugh, though in an understated way. Chill.

He tells me that the more he learned about Collinwood, the more interested he was in that disaster and less keen to work on his other finds—the explosion in Minneapolis, an earthquake in South Carolina, a shoe factory fire in Massachusetts. He says that by the spring of 2014, he was thinking about possibly pulling the Collinwood essay from his collection. Were he to focus not just on the fire itself but also on the greater contexts of the time and place, he would have enough material for a book-length manuscript; he saw potential for a book on an American disaster that had never been written.

At the same time, though, he had just submitted a different project proposal to a new initiative at Middlebury. That year, the Andrew W. Mellon Foundation had granted the College $800,000 to support digital scholarship. The newly created Digital Liberal Arts (DLA) initiative featured a faculty fellows program that would provide faculty with funding while they were on academic leave if they used digital tools for scholarship. Newbury had thought he might want to use geographic information systems to analyze and digitally interpret that earthquake in Charleston, South Carolina. When the DLA steering committee responded to his proposal with clarifying questions, he told them he had changed his mind.

“I said, ‘You know, this isn’t actually what I want to do. I’m going to send you a completely different proposal,’” he tells me. “It was after the deadline, but I didn’t care. I figured they could either approve it or not.”

The new project would focus on Collinwood, though what it would be, Newbury admits, he didn’t really know.

While Newbury’s proposal was before the DLA and as he obsessed over Collinwood, he attended an evening screening of films produced by students in the Department of Film and Media Culture. Though he was there ostensibly to watch his daughter act in a short about Abraham Lincoln, he was wowed by another film, an animated piece titled 11 Paper Place. The CGI animation about two pieces of paper that are ejected from a malfunctioning copier, dropping into a recycling bin where they magically transform into paper people and fall in love, would go on to win film festival awards and be honored by the streaming video platform Vimeo. But for Newbury, the film captured his imagination. What if you were to use that medium, the medium of animation, to anchor a scholarly project? He would subsequently bump into Daniel Houghton ’04, then Middlebury’s arts technology specialist and the director of 11 Paper Place. He posed the same question to him, while probing further: What would students be learning? What would he be learning? What product would emerge?

Newbury didn’t know this at the time, but Houghton was, as he would later tell me, “clinging to uncertain career prospects.” His contract had an end date, but he was also presented with the tantalizing opportunity to create an animation studio at Middlebury, at least in name. Though dedicated space for such a studio had not been identified, Houghton was told that if he had students interested in creating animated films outside of a classroom setting, he would be afforded the necessary time and resources to shepherd such projects. “The big risk was, if I couldn’t find anything to do or if I couldn’t encourage student work, the notion of an animation studio would be deemed a failure. At least, that’s what I thought would be the case,” he says. And then along comes Michael Newbury. “And we basically said, ‘Let’s do a thing.’ Whatever that turns out to be,” says Houghton, laughing.

While Newbury and Houghton conversed further, attempting to determine whether they could effectively work together on a project of indeterminate shape and scope, Newbury turned to his colleague Jason Mittell, who had been appointed the faculty head of the DLA. Mittell had been aware of Newbury’s work for some time—he had read several draft chapters of the once-planned book of essays on disasters, he had advised Newbury on his original DLA proposal that focused on the South Carolina earthquake, and he had consulted with him on his first stab at a digital Collinwood project. “I think originally he thought he might want to create a three-dimensional model of Collinwood and have that model be interactive,” Mittell tells me. (For various reasons, the idea of a Collinwood “video game” faded, not least of which had to do with the prohibitive cost of producing a quality gaming experience and the fact that Houghton, Newbury, and a team of recruited students were more interested in film narrative than games.) 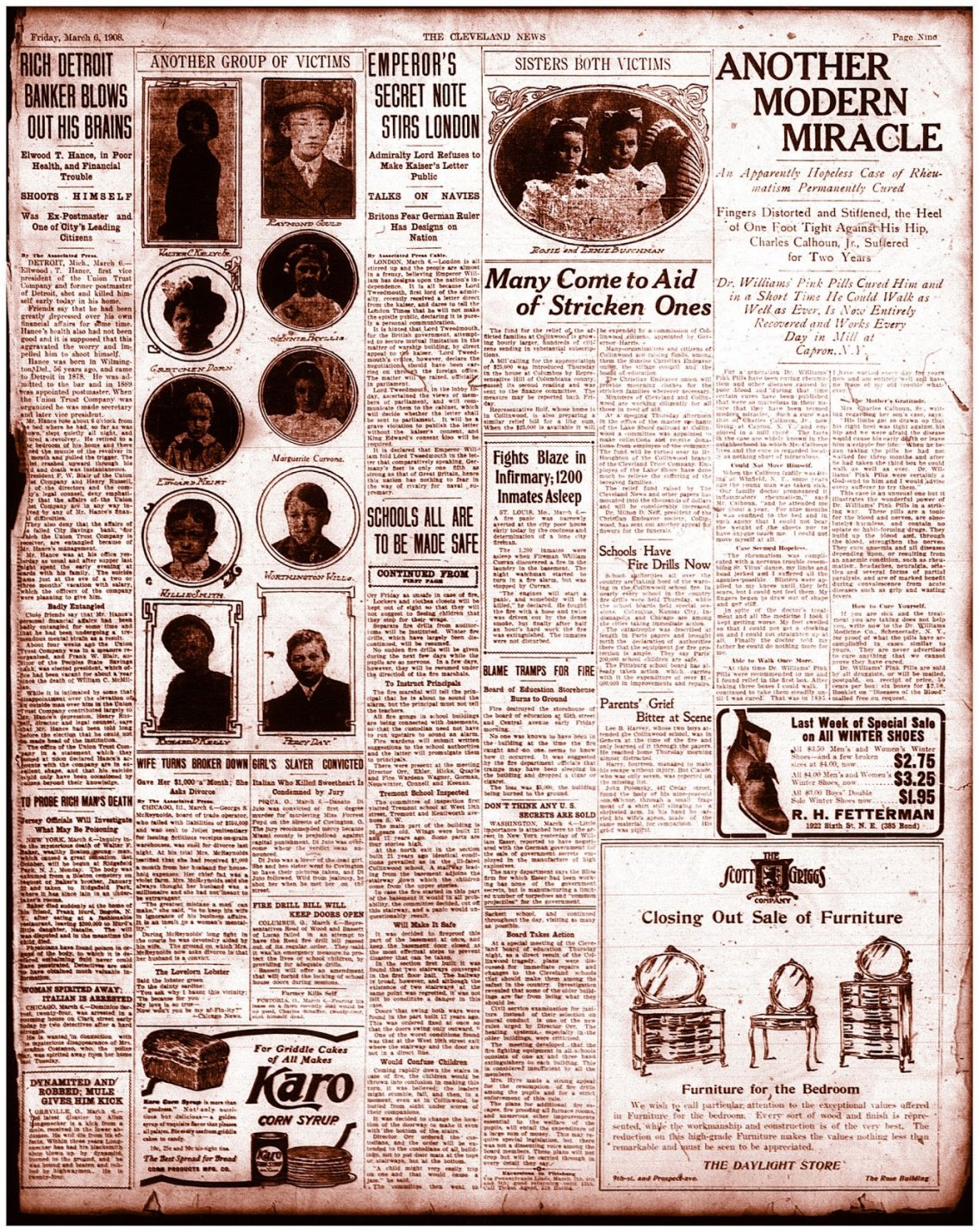 “I have a problem with conventional notions of definitiveness,” Michael Newbury says. He would define “definitive” as a large set of competing possibilities, rather than a magisterial, singular interpretation. This applies not just to the Collinwood disaster, he says, but to the very study of history. If this project does anything, he says, “I hope it encourages people to think of history as a process, rather than a collection of facts. Historical events should be consistently reevaluated, where systemic factors receive just as much scrutiny as proximate causes.”

That’s what you see when you visit the website. The film is there, naturally; it’s the beating heart of the project. But the brain and central nervous system of “The Collinwood Fire, 1908” are the rich histories of the day and place arranged in chapters on the site; they are vignettes, of a sort, each making sense on its own but resonating with the others to form a greater whole. Newbury thinks of them as a series of contemplations. And if one is to ask you what happened at Collinwood, the answer is not kids playing with matches or the janitor running the boiler too hot or even a school poorly designed. The answers are many. They are in the film and they are on the site and they are left for you to interpret.

And here’s the cool thing: that’s beginning to happen. Tara Martin teaches history at Middlebury Union High School. Newbury’s daughter was one of her students a few years ago, and Martin and the Middlebury professor got to talking about the project he was working on. Newbury asked if it might resonate with her students; absolutely, she said. But she was also thinking more broadly and began to research how the material could adhere to state and federal educational standards. Her work is now included on the site under the heading “teaching resources.” Martin and Newbury have subsequently spoken at conferences for social studies teachers in Ohio and Vermont and Boston, and next summer Newbury will travel to Cleveland at the invitation of the curriculum and instruction manager for social studies of the Cleveland Public School system. He’ll be speaking to the city’s social studies teachers about how they can introduce “The Collinwood Fire, 1908” into their classrooms.

Collinwood is being forgotten no more.