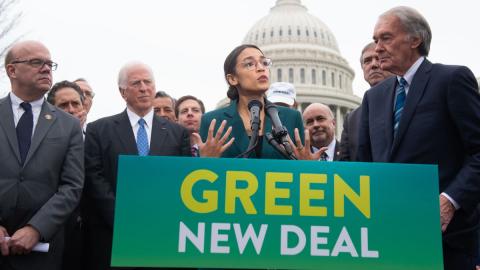 Arguing NO: Oren Cass, Senior Fellow at the Manhattan Institute. Mr. Cass’s work addresses issues ranging from the labor market to environmental regulation to trade and immigration to education and organized labor. He also writes extensively on the nature and implications of climate change and on the process of formulating and evaluating public policy. Cass has written for publications including the New York Times, Wall Street Journal, Washington Post, and Foreign Affairs, and he regularly speaks at universities and testifies before Congress. His 2018 book, The Once and Future Worker: A Vision for the Renewal of Work in America, has been called “the essential policy book for our time” by National Affairs. Previously, he served as the domestic policy director for Mitt Romney’s presidential campaign in 2012 and a management consultant with Bain & Company. He earned a B.A. in political economy from Williams College and a J.D. from Harvard Law School, where he was an editor of the Harvard Law Review.

Arguing YES: Robert Pollin, Distinguished Professor of Economics at the University of Massachusetts-Amherst. Dr. Pollin is Co-Director of the Political Economy Research Institute (PERI) and the founder and President of PEAR (Pollin Energy and Retrofits), an Amherst, MA-based green energy company operating throughout the United States. His books include The Living Wage: Building a Fair Economy (co-authored 1998); Contours of Descent: U.S. Economic Fractures and the Landscape of Global Austerity (2003); An Employment-Targeted Economic Program for South Africa (co-authored 2007); A Measure of Fairness: The Economics of Living Wages and Minimum Wages in the United States (co-authored 2008), Back to Full Employment (2012), Green Growth (2014), Global Green Growth (2015) and Greening the Global Economy (forthcoming 2015). He has worked recently as a consultant for the U.S. Department of Energy, the International Labour Organization, the United Nations Industrial Development Organization and numerous non-governmental organizations in several countries on various aspects of building high-employment green economies. He was selected by Foreign Policy magazine as one of the “100 Leading Global Thinkers for 2013,” and is author of several state-level “Green New Deals.” A graduate of UW-Madison, he earned his PhD at the New School for Social Research.