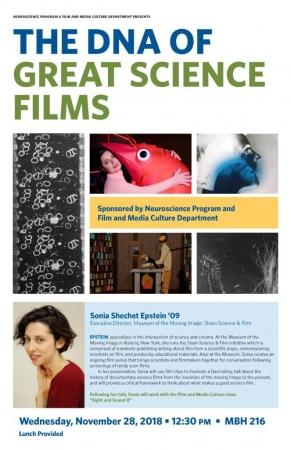 Sonia Shechet Epstein ‘09, specializes in the intersection of science and cinema. At the Museum of the Moving Image in Astoria, New York, she runs the Sloan Science & Film initiative which is comprised of a website publishing writing about film from a scientific angle, commissioning scientists on film, and producing educational materials. Also at the Museum, Sonia curates an ongoing film series that brings scientists and filmmakers together for conversation following screenings of rarely seen films.
In her presentation, Sonia will use film clips to illustrate a fascinating talk about the history of documentary science films from the invention of the moving image to the present, and will provide a critical framework to think about what makes a good science film.