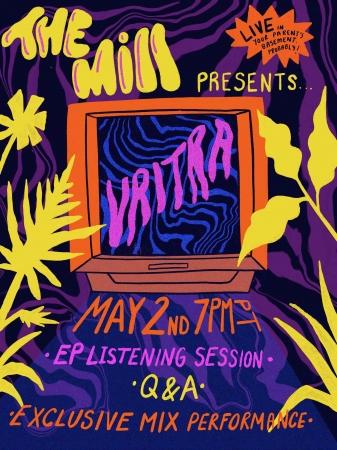 Los Angeles-based rapper / producer Vritra (real name Hal Donell Williams Jr.) will be streaming a track-by-track breakdown of a recently released EP, answering questions from the audience, and performing a mix produced exclusively for the Mill/Middlebury College.
Open to the college community so tell your pals, it’ll all be going down on Zoom (link to come), Saturday May 2nd at 7pm PT ((aka ten p.m. eastern.)) Come thru to hear from Hal, catch a live performance, and to have a chat (((only if you want to))) with a talented, uniquely creative artist.

Read up on Hal and a recent collaboration here: https://www.billboard.com/articles/columns/hip-hop/8505492/wilmer-vritra-interview-pyramid-odd-future

and check out the EP Hal will be breaking down here: https://soundcloud.com/vritra322/sets/floaters

An Odd Future co-founder, Hal has since gone on to release a myriad of projects, both collaboratively and independently. In 2009 Hal joined fellow O.F. member Matt Martians to create the duo The Jet Age of Tomorrow that went on to release projects spanning the sonic realms of funk, acid jazz, and experimental hip-hop with features from Mac Miller, Vince Staples, Earl Sweatshirt, Tyler, the Creator, Kilo Kish, Domo Genesis, and more.

Recently Hal joined British composer/producer Wilma Archer to form the duo Wilma Vritra. Together they released the 2019 album “Burd,” a project with misty electro-jazz symphonies and melancholic rap lyrics, per Billboard, that landed itself on Bandcamp’s Top Albums of 2019.

Hal has released a number of solo projects under the monikers Pyramid Vritra and Vritra, all of which are available on streaming services and Bandcamp.

Thanks to Rayn Bumstead for the poster design.