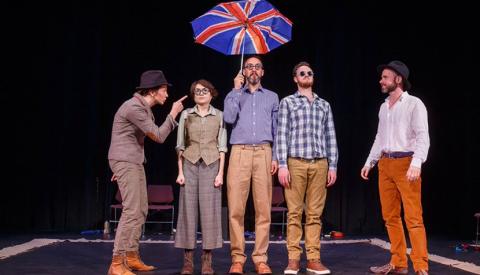 One of the most historied Shakespeare theatre companies in the world takes on the Bard’s comedic masterpiece, exploring two wildly different romances, each wrapped in secrets and trickery. Co-founded by Sir Patrick Stewart in 1975, Actors From The London Stage embraces theatrical simplicity at its finest. Five actors take the stage, with minimal props and costumes, and direct themselves in a performance of a complete Shakespeare play, with each actor portraying multiple roles. Their goal: to interpret Shakespeare’s text as a blueprint for a performance—and as a gateway to its wide-ranging, transformative poetry.

“Actors have a personal connection with dramatic texts, which is distinctive and different from the scholars. Our program gives the actor a unique platform from which to explore with professors and students what he or she does and why it is done.”—Sir Patrick Stewart, Founding Director

This live, in-person event is open to on- and off-campus audiences. Vaccinations and masks required. Additional health and safety information here. Performance subject to change.

This series event is supported by the Departments of English and American Literatures and Theatre, and is made possible with generous support from Raphael and Jane Bernstein.