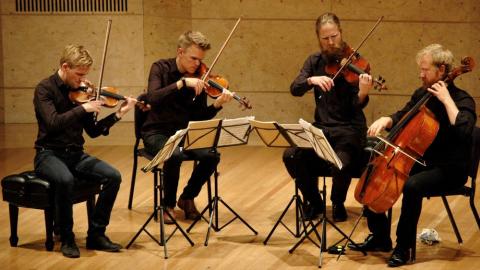 The Grammy-nominated Danish String Quartet is among today’s most in-demand chamber music ensembles.The palpable joy with which they perform—paired with their rare musical spontaneity—leaves audiences feeling as if they’re hearing treasured chamber music standards for the first time. Since their sold-out Middlebury debut in 2017, the quartet was named Musical America’s 2020 Ensemble of the Year. We also have another special connection: quartet violinist Rune Tonsgaard Sørensen returned to Middlebury in early March 2020 with folk trio Dreamers’ Circus, for what became the last live performance of the Performing Arts Series’ 100th anniversary season.

In this new, exclusive broadcast for Middlebury audiences, the quartet performs a program of Bach, Webern, and Nordic folk music, recorded in one of their favorite Copenhagen venues.

This broadcast will be available February 27–March 5 on our Digital Stage.

*Please note: This premiere airs on a Saturday evening; the rest of our spring programming premieres on Fridays.