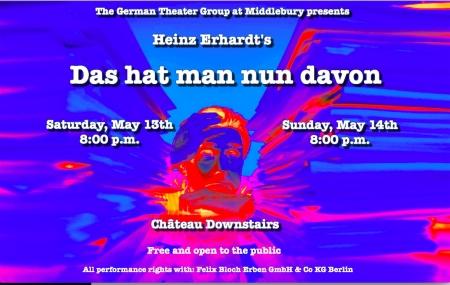 The German Theater Group at Middlebury presents Heinz Erhardt’s hilarious comedy “Das hat man nun davon”. Set in a German ministry of finance, the play follows the fate of the lowly employee Willi Winzig who, threatened with losing 1/3 of his hard-earned pension for offending a superior, needs to find a way to plead “not guilty by reason of insanity” to save his retirement. And he spares no effort to convince everyone that he is crazy … In German, English synopses available at the door.