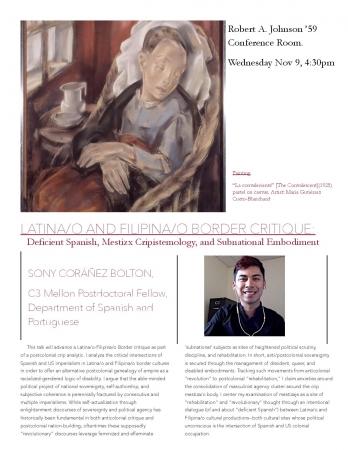 This talk will advance a Latina/o-Filipina/o Border critique as part of a postcolonial crip analytic. I analyze the critical intersections of Spanish and US imperialism in Latina/o and Filipina/o border cultures in order to offer an alternative postcolonial genealogy of empire as a racialized-gendered logic of disability. I argue that the able-minded political project of national sovereignty, self-authorship, and subjective coherence is perennially fractured by consecutive and multiple imperialisms. While self-actualization through enlightenment discourses of sovereignty and political agency has historically been fundamental in both anticolonial critique and postcolonial nation-building, oftentimes these supposedly “revolutionary” discourses leverage feminized and effeminate ‘subnational’ subjects as sites of heightened political scrutiny, discipline, and rehabilitation. In short, anti/postcolonial sovereignty is secured through the management of dissident, queer, and disabled embodiments. Tracking such movements from anticolonial “revolution” to postcolonial “rehabilitation,” I claim anxieties around the consolidation of masculinist agency cluster around the crip mestiza/o body. I center my examination of mestizaje as a site of “rehabilitation” and “revolutionary” thought through an intentional dialogue (of and about “deficient Spanish”) between Latina/o and Filipina/o cultural productions—both cultural sites whose political unconscious is the intersection of Spanish and US colonial occupation.