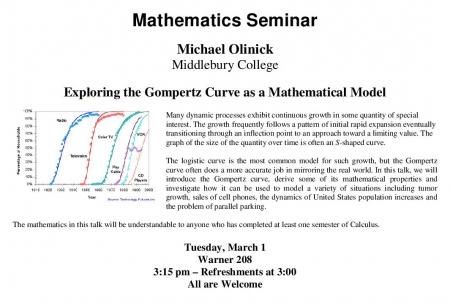 Exploring the Gompertz Curve as a Mathematical Model
Michael Olinick
Many dynamic processes exhibit continuous growth in some quantity of special interest. The growth frequently follows a pattern of initial rapid expansion eventually transitioning through an inflection point to an approach toward a limiting value. The graph of the size of the quantity over time is often an S-shaped curve.

The logistic curve is the most common model for such growth, but the Gompertz curve often does a more accurate job in mirroring the real world. In this talk, we will introduce the Gompertz curve, derive some of its mathematical properties and investigate how it can be used to model a variety of situations including tumor growth, sales of cell phones, the dynamics of United States population increases and the problem of parallel parking.