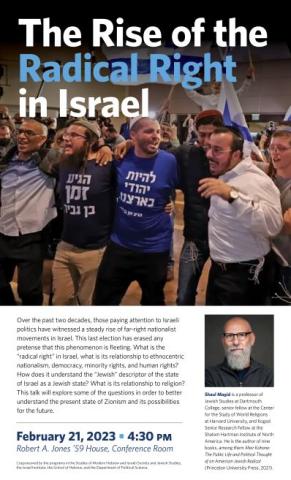 Over the past two decades, those paying attention to Israeli politics have witnessed a steady rise of far-right nationalist movements in Israel. This last election has erased any pretense that this phenomenon is fleeting. What is the “radical right” in Israel, what is its relationship to ethnocentric nationalism, democracy, minority rights, and human rights? How does it understand the “Jewish” descriptor of the state of Israel as a Jewish state? What is its relationship to religion? This talk will explore some of the questions in order to better understand the present state of Zionism and its possibilities for the future.

Shaul Magid is professor of Jewish Studies at Dartmouth College, Senior Fellow at the Center for the Study of World Religions at Harvard University, and Kogod Senior Research Fellow at the Shalom Hartman Institute of North America. He is the author of nine books, among them Meir Kahane: The Public Life and Political Thought of an American Jewish Radical (Princeton University Press, 2021).