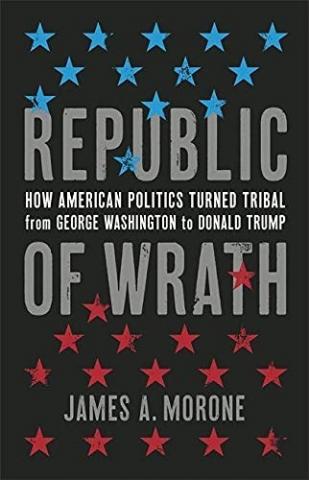 The RCGA program on Global Trends in Autocracy and Democracy presents James Morone ‘75 and presentation “Republic of Wrath: How American Politics Turned Tribal.”

American politics is loud, angry, and bristling with us versus them. The hostility between Republicans and Democrats seems to swell with every election. In 2009, a Republican Congressman shouted “You lie!” at President Barack Obama on national television and raked in almost two million dollars in campaign contributions the following week. Seven years later, candidate Donald Trump screamed “Punch him in the face!” and a delirious white supporter at a campaign rally buffeted a young black man while others shouted racial epithets. Republican Party members call Democrats “immoral” and “lazy.” Democrats fire back with “closed minded” and “dishonest.” On dating apps, people even spurn romance with partners from the opposite party—and that’s just as well since six out of ten parents would be unhappy about their children marrying someone from across the political divide.

But is there anything new in our screaming political divisions? Do they endanger the republic, as many observers fear? Or should we all take a deep breath as American politics runs through just another rowdy stretch? Professor James Morone scans American history to explain what is different about the passionate present—and how the past might guide us toward a better future.

In-person event at the Robert A. Jones ‘59 Conference Room, Middlebury Campus or register for the Zoom webinar here. For more information, visit the Rohatyn Center for Global Affairs events website or contact alumni@middlebury.edu.