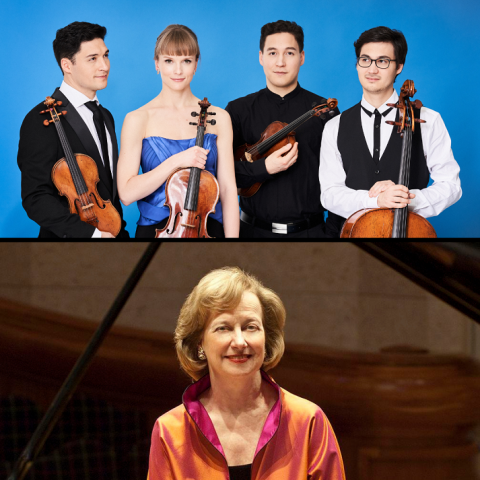 Alumni of the Bowers Program at the Chamber Music Society of Lincoln Center, the Schumann Quartet has been lauded as “one of the most exciting string quartets of the present day” by Fono Forum. Named BBC Music Magazine’s 2016 Best Newcomers of the Year, they make their Middlebury debut with a program including Mendelssohn’s Quartet in A Minor and Ravel’s Quartet in F Major. The second half of the evening finds the quartet collaborating with acclaimed Vermont pianist and Middlebury Affiliate Artist Diana Fanning in Schumann’s Quintet in E-flat Major.

About the Quartet: The three brothers Mark, Erik, and Ken Schumann have been playing music together since their early childhood. In 2012, they were joined by violist Liisa Randalu, who was born in the Estonian capital of Tallinn, and grew up in Karlsruhe, Germany. The four musicians enjoy the way they communicate without words—how a single look suffices to convey how a particular member wants to play a certain passage. The quartet has studied with Eberhard Feltz and the Alban Berg Quartet, and collaborated with partners such as Sabine Meyer and Menahem Pressler.

About the pianist: Diana Fanning is an internationally renowned musician who happens to make her home in Middlebury. She has toured extensively as a solo performer and chamber musician throughout the U.S. and in England, France, Austria, Switzerland, Holland, the Czech Republic, Canada, and Germany. As a chamber musician, Fanning has been a guest artist with the Takacs, the Jupiter, and the Alexander String Quartets, and with ensembles from Point Counter Point Music Camp, which she owned and directed for ten years with her husband Emory Fanning. With appearances with the Vermont Symphony Orchestra, Vermont Public Television, and “Morning Pro Musica” (WGBH-FM) Boston and on WNYC in New York City, she is well-known to regional audiences. She continues to teach as an Affiliate Artist with Middlebury College’s music department.

“With no ifs or buts, the Schumanns are among the best quartets in the world”—Süddeutsche Zeitung

“Diana Fanning stunned her listeners with the rich spectrum of subtle colors and tonal nuances she revealed. Her recital seized the audience with a veritable deep magic.”—Munich Press