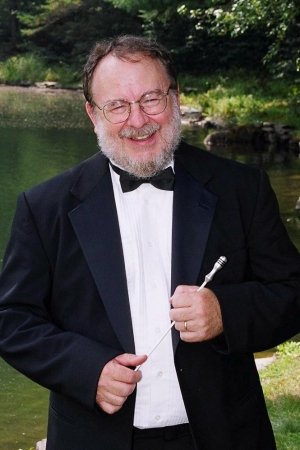 Mr. Irwin has served on the Vermont Music Educators Association Executive Board as District Divisions Coordinator (1989-Present) and as President (July 2001 to June 2009 ). Bear served as Vice President (‘90-’95) and President (‘95-’98) of the International Association of Jazz Educators Vermont Unit. Between 2000 and 2004, Bear was the Manager of the Vermont All State Music Festival Jazz Ensemble, and has been a Staff Member/Clinician/Conductor at Jazz Vermont (music camp with eight ensembles for adults from all over the country) since 1984.

Bear has been Director of the Lakes Region Youth Orchestra Concert Band since 2000 and a coach of Shrewsbury Chamber Music Society Brass and Jazz Ensembles since 1998. Mr. Irwin organized, manages and plays Lead Trombone for the Vermont Jazz Ensemble (since 1976), and he also performs with Satin ‘n’ Steel, Stolen Moments, Moments Notice, Doctor Burma, Catamount Brass, and other ensembles throughout Vermont, while guest conducting or doing workshops and clinics several times per year.

Mr. Irwin has been presented the Outstanding Vermont Teacher Award by the University of Vermont three times over twenty-two years ( from Enosburg Falls Jr.-Sr. H.S. in 1986, and from Rutland Town School in 2000, and from Mill River Union High School in 2008). He was named Vermont Educator of the Year by the Vermont VFW Auxiliary in 2000, and in May of 2009 Mr. Irwin was inducted into the Vermont Principals Association Hall of Fame.