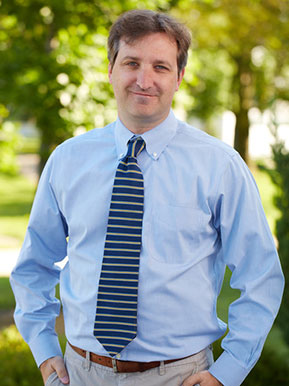 By the end of the summer of 2006—his first summer as a student at Middlebury’s Bread Loaf School of English—Sam had fallen in love with Middlebury and with the beauty and community found in Vermont.  Finally taking the Vermont plunge several years later, Sam joined Middlebury’s admissions staff in 2014 and was appointed Director of Admissions in 2019.  He began his career in college admissions at Swarthmore College, his alma mater, where he earned a BA in English and economics.  Sam then spent a total of 11 years on the high school “side of the desk” as a college counselor and English teacher at The Hotchkiss School in Connecticut and at Buckingham Browne and Nichols School in Cambridge, Massachusetts.  During his stint as a classroom teacher, he received the James C. Kapteyn Prize, which recognizes high school teachers “of exemplary character, integrity and honor who lead by example, imparting to their students a lifelong love of learning and dedication to personal growth.”  Sam is a frequent guest speaker on all matters pertaining to college admissions, and he enjoys dispensing free college admission guidance to anyone who’s interested to hear it.  Sam resides in nearby Weybridge with his wife, a local elementary school teacher, and their two young children.  They all enjoy exploring Vermont’s natural beauty by bicycle, kayak, and hiking trail.  Sam and his kids learned how to ski at the College’s Snow Bowl; their ski instructor was, of course, a Middlebury student!