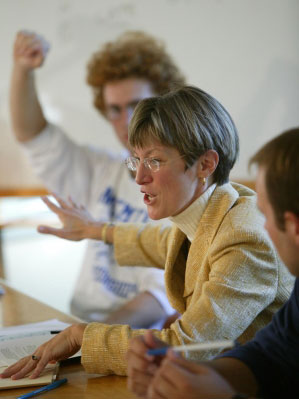 Allison Stanger is the Russell Leng ’60 Professor of International Politics and Economics at Middlebury College; Research Affiliate (Co-lead, Theory of AI Practice Initiative) at the Center for Advanced Study in the Behavioral Sciences, Stanford University; and External Professor and Science Board member at the Santa Fe Institute. She is the author of Whistleblowers: Honesty in America from Washington to Trump and One Nation Under Contract: The Outsourcing of American Power and the Future of Foreign Policy, both with Yale University Press. Professor Stanger is also the co-editor (with W. Brian Arthur and Eric Beinhocker) of Complexity Economics, co-editor and co-translator (with Michael Kraus) of Irreconcilable Differences? Explaining Czechoslovakia’s Dissolution (foreword by Václav Havel) and the author of numerous articles and essays. She is working on a new book tentatively titled Who Elected Big Tech?

Stanger has twice served as visiting professor of Government at Harvard University, where she spent academic year 2019-20 as technology and human values senior fellow at the Edmond J. Safra Center for Ethics. She was a co-author of the center’s April 2020 Roadmap to Pandemic Resilience and is a senior advisor to the Hannah Arendt Humanities Network. Stanger was the 2020 Cary and Ann Maguire Chair in Ethics and American History at the Library of Congress and 2020-21 SAGE Sara Miller McCune Fellow at the Center for Advanced Study in the Behavioral Sciences, Stanford University.

Stanger’s writing has appeared in the Atlantic, Foreign Affairs, Foreign Policy, Financial Times, International Herald Tribune, New York Times, USA Today, U.S. News and World Report, and the Washington Post, and she has testified (at the request of both Democrats and Republicans) before the Commission on Wartime Contracting, the Senate Budget Committee, the Congressional Oversight Panel, the Senate HELP Committee, and the House Committee on Government Oversight and Reform. She is a member of the Council on Foreign Relations and was also a contributor to the Booz Allen Hamilton project on the World’s Most Enduring Institutions, the Woodrow Wilson School Task Force on the Changing Nature of Government Service, and the Princeton Project on National Security. Stanger has served as an advisor to Secretary Clinton’s Policy Planning Staff, US Department of State (2009-2011) and was on the writing team that produced the State Department’s December 2010 Quadrennial Diplomacy and Development Review (QDDR).

Stanger received her Ph.D. in Political Science from Harvard University. She also holds an AM in Regional Studies-Soviet Union (Harvard), a graduate diploma in Economics (London School of Economics), and a BS in Actuarial Science/Mathematics (Ball State University). She has studied foreign languages and literature at Charles University (Prague), the Sorbonne (Paris), and the Pushkin Institute (Moscow).

Her research has been funded by the International Relations and Exchanges Board, the National Council for Soviet and East European Research, the American Council of Learned Societies, the National Science Foundation, the Institute for the Study of World Politics, and the MacArthur Foundation. In addition to the appointments mentioned above, she has been a research fellow at the Minda de Gunzburg Center for European Studies (Harvard University), Center for Economic Research and Graduate Education (Prague), the Institute for the Study of the USA and Canada (Moscow), New America (Washington, DC), the Brookings Institution (Washington, DC), and the Center for Science and International Affairs (Harvard University).

Democracy in America Reconsidered
This seminar’s ultimate aim is for students to grasp the evolving relationship between the public controversies in American politics and theoretical writings on liberty and equality that have influenced the course of American political development. Special attention will be paid to the gaps between the principles and practices of US democracy. The course has no doctrine to advance. It seeks to provide the materials and framework for lively and inclusive discussion about the challenges of institutionalizing freedom, democracy, and equality, ideals that inspire other governments around the world. 3 hrs. sem.

The Politics of Virtual Realities
How has technology changed our politics? Are those changes all for the good? In this course we will explore the political, legal, and normative implications of the Internet for liberal democracy. We start with the US Constitution and explore arguments that it cannot by itself prevent the Internet from becoming a domain of manipulation rather than of freedom. How can we uphold the ideals of liberty and equality? And, since cyberspace has no country, whose laws should govern it? Cases will include President Obama's campaign and governance strategies, Google's activities abroad, cybersecurity, virtual war, and the WikiLeaks controversy. 3 hrs. lect./disc. (International Relations and Foreign Policy)/

American Foreign Policy
Does America exercise its power in the world in a distinctive way? If yes, has it always done so? In this course we will examine the evolution of American foreign policy from the time of the founding to the present. As we make our way from the height of the Cold War to the 21st century, we will assess how leaders, institutions, domestic politics, and the actions and inactions of other countries have shaped American international behavior. Topics considered include terrorism, nuclear proliferation, globalization, democracy promotion, whether the rich US has an obligation to help the less fortunate, how much power the Pentagon should have, what role the private sector can and should play in advancing American interests, and the Bush revolution in foreign policy. A central aim of the course is to map competing perspectives so that the student can draw his or her own political conclusions. 3 hrs. lect./disc. (International Relations and Foreign Policy)/

The Political Development of Western Europe
In what ways are the political systems and politics of France, Germany, Italy, and Britain similar? In what ways do they differ? How might we explain these patterns? This course attempts to answer these questions through comparative investigation of the processes and consequences of economic and political modernization in these nations from the feudal period to the 21st century. 3 hrs. lect./disc. (Comparative Politics)/

Who Elected Big Tech?
There is public awareness that technology is delivering unprecedented opportunities while simultaneously undermining privacy, equity, and democratic values. An unprecedented shift in the balance of power between multinational industry and national governments has been a necessary condition for these new challenges. How else could a freely elected American president be silenced by Google, Twitter, and Facebook? How else could Facebook’s Instagram be exposed as knowingly causing harm to teenagers without government penalty? How did America reach the point where Big Tech has the capacity to mount foreign policies? What consequences for social justice follow from that transfer of power in a global economy of multinational companies and diverse workforces? By first exploring these questions together, students will be well prepared for pursuing independent research projects. (International Relations and Foreign Policy)/

One Nation Under Contract

In development: Who Elected Big Tech?

One Nation Under Contract: The Outsourcing of American Power and the Future of Foreign Policy (Yale University Press, 2009; paperback edition, 2011).

“Democracy’s Tripwire: Global Corruption and Whistleblowing in Europe and the U.S.,” Center for European Studies Open Forum Series, no. 40, August 7, 2020.

“Consumers versus Citizens in Democracy’s Public Sphere,” Communications of the Association for Computing Machinery, Vol. 63, No. 7, July 2020, pp. 29-31.

“Whistleblowing as Civil Disobedience: Leaks in the Era of Trump and the Deep State,” HA: The Journal of the Hannah Arendt Center, volume VII, 2019.

“Transparency as a Core Public Value and Mechanism of Compliance,” Criminal Justice Ethics, vol. 31, no. 3, December 2012.

“Prejudice and the Shadow of the Past in the Emergence of Cooperation,” in I. William Zartman, ed., Explaining Cooperation Among States (New York: Cambridge University Press, 2010).

Foreword to Richard Fontaine and John Nagl, Contracting in Conflicts: The Path to Reform, Center for a New American Security, June 2010.

Testimony before the House Committee on Oversight and Government Reform, Hearing on “Challenges to Freedom of Speech on College Campuses, Part II”—May 22, 2018.

Testimony before the Congressional Oversight Panel, “Hearing on Treasury’s Use of Private Contractors”—September 22, 2010.

Testimony before the Senate Budget Committee, Hearing on “Responsible Contracting: Modernizing the Business of Government”—July 15, 2010.

Testimony before the Commission on Wartime Contracting, Hearing on “Are Private Contractors Performing Inherently Governmental Functions?”—June 18, 2010.