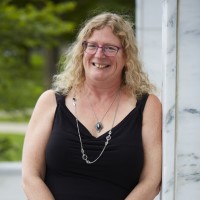 Amy Holbrook has been a staff member of Middlebury College since October of 1993 and a member of the economics department since May of 1997.

In April 2005, Amy received a Staff Recognition Award, endowed by Rudolf K. Haerle, Jr., Professor Emeritus of Sociology, for her “record of leadership, stewardship, and community service at Middlebury College.” As a recipient of this award, Amy served as a member of the selection committee for the 2006 award recipients.

Amy was elected Staff Council member-at-large and was an active member on Staff Council during her two-year term (July 2006-July 2008), serving on the executive committee in the capacity of co-secretary during her first year. While on staff council Amy served on several subcommittees, including staff appeals. She also served as the staff council liaison for the Green Cleaning and Personal Care Project in 2006 organized by Campus Sustainability Coordinator, Jack Byrne.

In May 2008, Amy was nominated for the Rodney and Beverly DeGray Staff Appreciation Award.

In June of 2017, Amy and Tiffany Sargent ‘79 were selected as the first two recipients of the inaugural Virtue Family Exceptional Service Award established by a gift from Ted ‘82 and Dani Shaw Virtue ‘82 to recognize faculty and staff who have “gone above and beyond their normal professional responsibilities to support and connect with students in ways that build a more engaged and inclusive Middlebury Community.”

Prior to joining the economics department, Amy served as bookkeeper for the American Collegiate Consortium, a grant-funded undergraduate exchange program between the former Soviet Union and the surrounding Baltic States, based at Middlebury College. It was there that she began developing close relationships with international students, a passion that has continued throughout her time at Middlebury College. While always “hosting” international students, Amy only became an “official” host parent in 2006 through the Friends of International Students Host Program.  She has hosted Thanksgiving dinners in her home for International Students and other students who remain on campus during the break since 2005.

Amy has been a member of the Ova Chicks Relay For Life (RFL) team since the first Relay was initiated at Middlebury College in April 2004 and has served as Team Captain since 2010.  During Relay 2005 Amy received one of two Spirit Awards. Amy was selected as the closing speaker for Relay 2012 and was also honored with the 2012 spirit award! Amy was pleased to have had her mother Elaine Holbrook (a breast cancer survivor) as a RFL teammate for 9 years. In 2013, at the 10th Annual Relay For Life, a tribute was done for both colleague and fellow relayer Ana Martinez-Lage (who died in January 2013) and Amy’s mother Elaine (who died in February 2013) to honor them for their time & dedication to the fight against cancer.

Amy is the proud mother of four sons and two grandchildren as well as many Middlebury College international students she has served as a host parent to over the years!