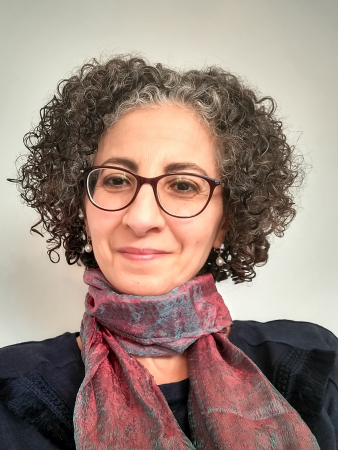 Febe Armanios received her BA, MA, and Ph.D. from the Ohio State University. Her research interests have focused on the history of Christian communities in the Middle East, particularly on Egypt’s Coptic Christians, on Muslim-Christian relations, as well as food history and media studies. She has been awarded fellowships from the Fulbright Foundation, the Gerda Henkel Foundation, the John Templeton Foundation, the Andrew W. Mellon Foundation, the National Endowment for the Humanities, Luce Foundation-ACLS, and Fordham University, among others. In 2015, she was a Visiting Fellow at Harvard Law School (ILSP), and in recent years, she’s served as an Editorial Board member for the International Journal of Middle East Studies, as well as on the Steering Committee for the Middle Eastern Christianity Unit at the American Academy of Religion.

For the 2021-22 academic year, she will be the Bennett Boskey Distinguished Visiting Professor of History at Williams College. She will also co-Direct Middlebury’s Axinn Center for the Humanities (remote).

Currently, she’s completing a book-length project on the history of Christian television (terrestrial and satellite) in the Middle East (ca. 1981-present) and has also begun research for another book project, which looks at the comparative history of Christian food practices in the Eastern Mediterranean and Southern Europe.

Special research projects may only be taken during the Junior or Senior year, preferable after taking HIST 0600. Approval of department chair and project advisor is required.

Senior Independent Study I
The optional History Senior Thesis is written over two terms, with the final grade applying to both terms. Approval is required. Students submit thesis proposals in the spring before the year that they choose to write their thesis. Students generally begin their thesis in the fall and complete it during winter or spring. Approval is required to begin the thesis in winter or spring. All students must attend the Thesis Writer's Workshops in fall and winter semesters and work with a faculty advisor to complete a 55-70 page paper. Please see detailed guidelines under history requirements.

Senior Independent Study II
With departmental approval, senior history majors may write a two-term thesis under an advisor in the area of their choosing. The final grade is applied to both terms. Students must submit thesis proposals in the spring before the academic year that they choose to write their thesis. They must attend the Thesis Writers' Workshops held in the fall and winter of the academic year in which they begin the thesis. The department encourages students to write theses during the fall (0700) and winter terms (0701), but with the permission of the chair, fall/spring and winter/spring theses are also acceptable. Under exceptional circumstances, the department may approve a thesis initiated in the spring of an academic year and finished in the fall of the following year. Further information about the thesis is available from the department.

History of Islam and the Middle East, Since 1453
This course is an introduction to the major institutions that evolved under the aegis of what we might call Islamic civilization since the Ottoman conquest of Constantinople in 1453. The principal geographic areas covered are the Middle East and North Africa. Major topics include the rise of the Ottoman and Safavid Empires, Western intervention and colonialism, nationalism and state formation, and the challenges of and responses to modernization. Pre-1800. 2 hrs. lect./1 hr. disc.

Food in the Middle East: History, Culture, and Identity
In this course we will examine the rich culinary history of the Middle East from the time of major Islamic Empires, such as the Abbasids and Ottomans, until the modern period. Using an array of primary and secondary sources, we will explore the social, religious, literary, and economic place of food in the region. We will study the consumption of and attitudes toward specific foodstuffs, gauging the relevance of items like spices and coffee in the pre-modern period and of various dishes within modern nationalist constructions. We will also investigate how Middle Eastern peoples from different ethnic, geographic, and religious backgrounds have historically used food to express their distinct cultural, national, and gendered identities.(Counts for HSMT credit) 3 hrs. lect./disc.

The Early History of Islam and the Middle East
This course is an introduction to the history of Islamic civilizations from the advent of Islam around 610 C.E. to the Ottoman conquest of Constantinople in 1453. The principal geographic areas covered are the Middle East and North Africa. Since "Islam" encompasses not simply a religion but an entire cultural complex, this course will trace the development of religious, political, economic, and social institutions in this region. Topics covered include the early Islamic conquests, the rise of religious sectarianism, gender relations, and the expansion of Islamic empires. Pre-1800. 2 hrs lect./1 hr. disc.

History of the Modern Middle East
This course investigates the history of social and political change in the Middle East from 1798 to the present. Within a general political framework, the course will cover the main social, economic, and intellectual currents. Emphasizing political, economic, social and cultural history, the course seeks to examine the impact of outside powers on the region, the responses of the region's peoples to this challenge, colonization, nationalism and identity, religious and ideological trends, gender issues, major "crises" (including the Arab-Israeli conflict, the Lebanese civil war, and the Iranian Revolution), and efforts to reassert Islamic identity in an era of globalization. 3 hrs. lect./disc.

Christians in the Modern Middle East
In the Middle East, Christians have faced fast-paced political, economic, and religious transformations. Focusing on indigenous communities such as Copts, Greek Orthodox, Armenians, Assyrians, and Maronites, we will explore Christianity’s place in the region, from the nineteenth century up to the present. Against the backdrop of a waning Ottoman Empire, mounting European colonialism, and the rise of nationalism and Islamism, we will investigate Christians’ status as minorities, who have at times been privileged and at other times been marginalized, exiled, and shunned. We will also pay attention to the ways in which Western governments and Christian missionaries have transformed the lives of Middle Eastern Christians in their quest for evangelism, apocalypticism, and regional domination. Class sources will include memoirs, novels, and films. 3 hrs. lect./disc.

Writing History
In this course students discuss historical methods and writing strategies to create convincing historical narratives. With the approval and guidance of the professor, students complete a 20-25-page research paper based on primary and secondary sources. Students take this course in the fall of their junior year or with permission in the spring. If students are away for the entire junior year, they can take the course in the fall of their senior year. 3 hr. sem.

Halal Food: A History, co-authored with Boğaç Ergene (Oxford University Press, 2018; paperback 2020) -Winner of the Best Book Award 2019 by the Association for the Study of Food and Society

“A Christian Public Space in Egypt: Historical and Contemporary Reflections,” in Katsumi Fukasawa, Benjamin J. Kaplan, Pierre-Yves Beaurepaire, eds. Religious Interactions in Europe and the Mediterranean World Coexistence and Dialogue from the 12th to the 20th Centuries (London: Routledge, 2017), 317-330.

“Coptic Faith and Practice in Egyptian Contexts,” in Elizabeth W. Fernea, Farhad Daftary, and Azim Nanji, eds. Living in Historic Cairo: Past and Present in an Islamic City (London and Seattle: The Institute of Ismaili Studies and the University of Washington Press, 2010), 86-92.

“Who are Copts? Reflections from the Past and Present,” at “The Coptic Christian Tradition Workshop,” Baylor University, February 6, 2019.

“On Coptic Food Customs in Ottoman Egypt,” at “Christians and Jews in Ottoman Society,” University of Oxford, Oxford, UK, July 3-5, 2017.

“From Marginalia: Writing Coptic History for the Ottoman Period,” at “Recovering the Role of Christians in the History of the Middle East,” the Department of Near Eastern Studies, Princeton University, Princeton, NJ, May 6-7, 2016.