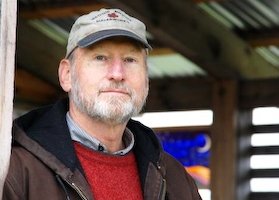 John Elder joined the Middlebury College faculty in 1973.  His original appointment was in English, followed by a split-appointment in English and American Literatures and in Environmental Studies.  In 2007 he was appointed as a non-departmental College Professor.   Starting in 1981, he has also taught most summers at the Bread Loaf School of English, including at the Alaska, New Mexico, and North Carolina campuses as well as at the Mother Loaf.  He retired from Middlebury in 2010.

John’s special areas of interest as a teacher were in American nature writing, English Romantic Poetry, modern American poetry of nature, and Japan’s haiku tradition.  In the years immediately before his retirement, he has also enjoyed exploring the possibilities for service-learning and community-based education, through courses related to residents’ sense of place in the nearby town of Starksboro and to the challenges and hopes of eleven Addison County farmers.  His three most recent books — Reading the Mountains of Home, The Frog Run, and Pilgrimage to Vallombrosa — have each combined discussion of literature, description of Vermont’s landscape and natural history, and personal memoir.  A multi-media website called http://www.johnelderauthor.com/picking-up-the-flute/ reports on his wife Rita’s and his immersion in traditional Irish music since their retirements from teaching, and is now being published as an audio book.

With Rita, a retired special educator, John lives in the village of Bristol.  They operate a sugarbush in Starksboro with the families of their two sons and are active in state and local environmental efforts.

Information about John’s current projects can be found at his professional website, https://sites.middlebury.edu/johncelder.