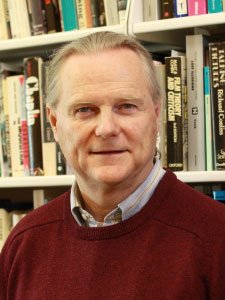 Leger Grindon is the author of Knockout: the Boxer and Boxing in American Cinema (Jackson: University Press of Mississippi, 2011) http://www.upress.state.ms.us/books/1390, Hollywood Romantic Comedy: Conventions, History, Controversies (Malden, MA.: Wiley-Blackwell, 2011) http://www.wiley.com/WileyCDA/WileyTitle/productCd-1405182652.html and Shadows on the Past: Studies in the Historical Fiction Film (Philadelphia: Temple University Press, 1994).  Professor Grindon received his Ph.D. in Cinema Studies from New York University in 1986. His research and teaching interests include film history, documentary film, Hollywood genres, and film criticism. For more details about his publications and professional activities, connect to his CV.

Professor Grindon’s essays and reviews have appeared in numerous critical anthologies as well as journals such as Film Quarterly, Cinema Journal, The Quarterly Review of Film and Video, Film History and The Velvet Light Trap. He served as the Secretary-Treasurer of the Society of Cinema Studies from 1990-1992 and on the editorial board of Cinema Journal from 1999-2002.

In addition, he serves as a faculty associate with the men’s tennis team. Leger is an avid tennis player, enjoys cycling and still loves going to the movies. He is a husband and father and has been on the faculty at Middlebury College since 1987.

Global Film Histories
This course will survey the development of the cinema from 1895 to present. Our study will emphasize film as an evolving art, while bearing in mind the influence of technology, economic institutions, and the political and social contexts in which the films were produced and received. Screenings will include representative and celebrated works from world cinema. 3 hrs. lect./3 hrs. screen

Documentary: Art of the Nonfiction Film
Documentary film combines nonfiction with an aesthetic aspiration. This course will explore the achievement in the documentary, raising issues about the influence of documentary upon political persuasion, historical memory, the status of film as evidence, and its utility as a means of investigation. Questions will be posed, such as: Can documentary achieve a distinctive understanding of a phenomenon? How does nonfiction address/guide the relationship between sound, image, and subject? The course will offer a historical perspective, as well as study contemporary works, with the aim of preparing students to both understand and produce documentary films. 3 hrs. lect./3 hrs. screen.

Film Noir
A series of urban crime films and melodramas made in Hollywood between 1940-1960, but concentrated in the decade immediately after World War II, have been understood by critics to constitute the movement of film noir. This course will study prominent films from this group as well as contemporary films influenced by them, and the critical literature they have elicited in order to understand the cultural sources, the stylistic attributes, the social significance, and the long-term influence attributed to film noir. 3 hrs. lect./3 hrs. screen.

Film Comedy
A survey of American film comedy from the silent era to contemporary productions. The course will focus on various approaches such as clown comedy, romantic comedy, and satirical comedy. In addition, the course will explore screen comedy in the context of various theories of comedy, including the narrative design, the social dynamics, and the psychological understanding of humor. The filmmakers will include: Chaplin, Keaton, Lubitsch, Wilder, Woody Allen, among others. Screenings, readings and written assignments. 3 hrs. lect./3 hrs. screen.

Senior Independent Work
After completing FMMC 0700, seniors may be approved to complete the project they developed during the previous Fall semester by registering for this independent course during the Winter Term, typically supervised by their faculty member from FMMC 0700. Students will complete an independent project in a choice of medium and format, as outlined on the departmental website. This course does not count toward the required number of credits for majors, but is required to be considered for departmental honors. In exceptional cases, students may petition to complete their projects during Spring semester.