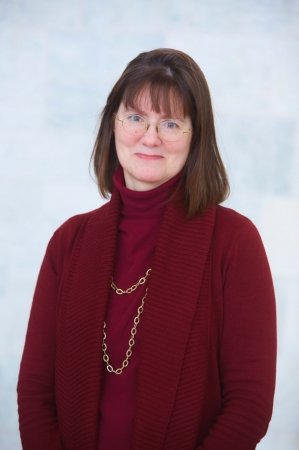 Martha K. Woodruff earned her Ph.D. in Philosophy from Yale University with support from the Mellon Humanities Fellowship. She also studied for two years at Universität-Freiburg with a grant from DAAD (German Academic Exchange Service) and received her B.A. from Haverford College. Her main areas of research and teaching include Ancient Greek philosophy and its influences on 19th and 20th Century German thought. A more recent interest focuses on women and gender in Greek philosophy and tragedy. She teaches a range of 10 courses at Middlebury.

Her publications have examined Plato, Aristotle, Nietzsche, and Heidegger, considered both individually and comparatively. She has completed one book manuscript and started another; both examine retrievals of the Greeks by contemporary thinkers. In addition, she served a three-year term as Co-Director of the Ancient Philosophy Society and a five-year term as Chair of the Philosophy Department at Middlebury. She has also participated in the German-language Philosophy Reading Group at the Middlebury German School (summers 2013-2019), with support from a One Middlebury grant.

She has also received grants awarded from the Engaged Listening Project, the Institute for the History of Philosophy at Emory University, and the Whiting Foundation.

"The Ancient Quarrel": Greek Philosophy, Tragedy, and Comedy
In Plato's day there was a “quarrel” between philosophy and poetry, a rivalry for the ethical education of citizens. How do the tragedies of Aeschylus and Sophocles communicate ethical dilemmas? Does Aristophanes in The Clouds suggest a serious critique within his comic satire of Socrates? Why does Plato banish the poets from his ideal city in The Republic, but develop his own philosophical poetry? Why does Aristotle in the Poetics emphasize the catharsis of the tragic emotions? Finally, we will consider Nietzsche's interpretation in The Birth of Tragedy: Socratic rationalism deals the fatal blow to tragedy, yet Plato transforms Socrates into a tragic figure. 3 hrs. sem.

Liberal Arts in Hist and Phil

Liberal Arts in Greco-Roman, Medieval, Renaissance History & Philosophy
In this intensive reading course, we will explore the origins of liberal arts education in ancient Greek, Roman, medieval and Renaissance traditions. What sources and subjects have informed the evolution of liberal arts as an ideal for free citizens? What were the original meanings of artes liberales? What were the medieval liberal arts of trivium and quadrivium? How do these histories influence contemporary debates on education? Readings from Greco-Roman authors include the Pythagoreans, Plato, Aristotle, Cicero, and Seneca. Readings from medieval and Renaissance Europe include Boethius, Isidore of Seville, Herrad of Landsberg, the Scholastics, Leonardo Bruni, and Pier Paolo Vergerio.

Introduction to the Western Philosophical Tradition
This course will introduce students to fundamental philosophical issues concerning the nature of reality (metaphysics), the possibility of knowledge (epistemology), and the nature of value (ethical theory) through a reading of a number of important primary texts of thinkers such as Plato, Aristotle, Descartes, Hume, Kant, Kierkegaard, Mill, Nietzsche, and Freud. Cannot be taken by students with credit for PHIL 0151. 3 hrs. lect., 1 hr. disc.

Ancient Greek Philosophy
This class introduces students to the range and power of Greek thought, which initiated the Western philosophical tradition. We will begin by exploring the origins of philosophy as found in myth (primarily Hesiod) and in the highly original speculation of the Pre-Socratic thinkers (such as Heraclitus and Parmenides). We will then focus on Socrates, Plato, and Aristotle, examining their transformations of these earlier traditions and their own divergent approaches to ethics and education. We will also consider the influences of Greek philosophy on later thought. 3 hrs. lect.

Philosophy and Literature
In this course we will explore the border both separating and joining philosophy and literature. How does literature evoke philosophical problems, and how do philosophers interpret such works? How does fiction create meaning? Beginning with Greek tragedy, we investigate Plato’s “quarrel” with, and Aristotle’s defense of, poetry. Then we will turn to modern works, mostly European, on topics such as: tragedy and ethics; style and rhetoric; author and reader; time and temporality; mood and emotion; existence and mortality. Literary readings after Sophocles will be selected from Borges, Calvino, Camus, Kafka, Tolstoy, and Woolf. Philosophical readings after Plato and Aristotle will be selected from Bergson, Danto, Freud, Murdoch, Ricoeur, and Nussbaum. Not open to students who have taken PHIL/CMLT 1014 or FYSE 1081.

Philosophy of Plato
In this class, we will explore the significance, influence, and development of Plato's thought, paying special attention to the form of the dramatic dialogue and topics such as Platonic love, rhetoric and politics, learning and recollection, and the theory of forms. We will begin with the early period (dialogues such as the Meno and the Apology) focused on the historical figure of Socrates, continue to the middle period (Symposium, Republic), in which Plato develops his own distinctive views; and conclude with the later period (Philebus, Parmenides) in which Plato suggests a critique of Socrates and his own earlier positions. (Previous course in philosophy or waiver)

Philosophy of Aristotle
In this class we will explore both the original breadth and the contemporary relevance of Aristotle's thought. We will read a diverse selection of his writings, beginning with ethical and political works, continuing to works on art and poetry, the soul, and nature, and concluding with logical and ontological works. We will ask why Aristotelian virtue ethics in particular has enjoyed a recent renaissance and generated special interest in Aristotle's ideas about the ethical role of friendship, the perceptive power of the emotions, and the different kinds of intelligence. (Previous course in philosophy or waiver.) 3 hrs. sem.

Modern Philosophy & Literature
In this course, focused on close, intensive readings of key texts, we will explore the border that both separates and joins philosophy and literature. How does literature evoke philosophical problems, and how do philosophers interpret such works? How does fiction create meaning?  We will explore philosophical literature and literary philosophy in 20th Century works, mainly European and North American, on topics such as: style and rhetoric; author and reader; time and temporality; mood and emotion; existence and mortality. Literary readings will be selected from Borges, Calvino, Camus, Kafka, Morrison, and Woolf. Philosophical readings will be selected from Bergson, Danto, Freud, Murdoch, Nussbaum and Ricoeur. (Previous course in PHIL or CMLT or waiver) (Not open to students who have taken PHIL/CMLT 0286)

“Katharsis Revisited: Aristotle on the Significance of the Tragic Emotions.” Newsletter of the Society for Ancient Greek Philosophy Vol. 8.2 (February 2008)

“Plato’s Different Device: Reconciling the One and the Many in the Philebus.” In Philosophy in Dialogue: Plato’s Many Devices. Edited by Gary Alan Scott.  Evanston, IL: Northwestern University Press, 2007

“The Ethics of Generosity and Friendship: Aristotle’s Gift to Nietzsche?” In  The Question of the Gift. Edited by Mark Osteen. New York, NY: Routledge, 2002

“From the Kantian Sublime to the Nietzschean Tragic: A Commentary.” American Society for Aesthetics, Philadelphia, March 2015

“Aristotle on Truth in Fiction: A Commentary.” American Society for Aesthetics, Philadelphia, March 2014

“Plato on Belief and Persuasion: A Commentary.” University of Texas at Austin, 35th Annual Workshop on Ancient Philosophy, March 2012