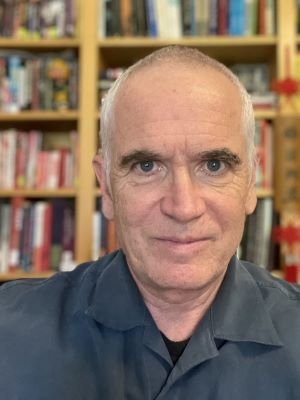 John D. Berninghausen Professor of Chinese Thomas (Tom) Moran has a Ph.D. in modern Chinese literature from Cornell University and has been at Middlebury since 1994. He teaches courses in modern and contemporary Chinese literature, film, and documentary film, as well as in Chinese language, including beginning Mandarin for many years and more recently 2nd-year Mandarin. He has taught First Year Seminars on the culture of mountains East and West, the discourse of nature in Chinese civilization and, most recently, “Fate, Filial Piety and Passion in Chinese Civilization.”

Tom is currently serving his fourth term as Chair of the Greenberg-Starr Department of Chinese Language and Literature. He has been Director of East Asian Studies (2009-2011), acting director of the Literature Program (2009-2010), and director of the C.V. Starr Middlebury School in China, Beijing (spring 2011). He has received grants from the Committee for Scholarly Communication with the People’s Republic of China, the Center for Chinese Studies at the National Library of Taiwan, the Blakemore Foundation, and the Fulbright Senior Scholar Program.

Tom has published many book chapters and articles and as well as translations of modern and contemporary Chinese plays, short stories, film scripts, and essays. He most recently published works are his book chapter “Resignation Open-Eyed: On the Chinese Novel Rickshaw Boy by Lao She,” in The Wiley Blackwell Companion to World Literature (John Wiley & Sons Ltd/Inc., 2020), and his translation of Chen Fangming, “Yu Guangzhong’s Modernist Spirit: From In Time of Cold War to Tug of War with Eternity,” in Chinese Poetic Modernisms (Brill, 2019). Tom wrote about the poet Yu Guangzhong for the DLB volume on poets, and his video lecture on Rickshaw Boy, which Tom prefers to call Camel Xiangzi, is one of the lectures by scholars that are available here: https://u.osu.edu/mclc/log-in/

Tom has been affiliated with Middlebury’s program in environmental studies since 2004. His article “Lost in the Woods: Nature in Soul Mountain” (Modern Chinese Literature and Culture, Vol 14, No 2, Fall 2002), a study of a novel by Nobel Laureate Gao Xingjian, was one of the first works of ecocriticism about modern Chinese literature. He has published translations of selections from the late Chinese essayist and deep ecologist Wei An’s “Things on Earth,” which have appeared in “Mānoa,” “Cerise Press,” and the “New England Review.”

Before beginning graduate school at Cornell in 1984, Tom majored in Journalism, English, and Education at Syracuse University, worked as a carpenter’s assistant, taught sixth grade at the International School of Beijing and eighth grade at Holy Redeemer School in Washington, D.C. Tom is from northern Virginia (he is a graduate of the high school that Tom is very happy and proud to say has been renamed John R. Lewis High School), and he now lives in Ripton with his wife, Rebecca Purdum (http://rebeccapurdumpaintings.com/). Tom and Rebecca volunteered for more than a decade as “citizen scientists” for the Vermont Breeding Bird Atlas, Vermont Forest Bird Monitoring Program and Mountain Birdwatch, and they spend as much time as they can outside learning as much as they can about flora and fauna.

Beginning Chinese
An intensive continuation of CHNS 0101, this course is required of those wishing to take CHNS 0103 in the spring. Students may anticipate learning a significant amount of new vocabulary, sentence patterns and idiomatic expressions. Skits, oral presentations, writing assignments, and cultural activities are also part of this course. (CHNS 0101)

Intermediate Chinese
This course is designed to enable the student to converse in everyday Chinese and to read simple texts in Chinese (both traditional and simplified characters). Discussion of assigned readings will be conducted primarily in Chinese. Familiarity with the vocabulary and grammar introduced in CHNS 0101, CHNS 0102, and CHNS 0103 is assumed. Grammatical explanations, written exercises, dictation quizzes, sentence patterns, oral drill, and CD's will accompany assignments. By the completion of CHNS 0202, which follows CHNS 0201 directly, students should be able to read and write approximately 1,200 characters. (CHNS 0103 or equivalent) 5 hrs. lect., 1 hr. drill

Intermediate Chinese
This course is a continuation of the first term's work, with the class conducted primarily in Chinese. (CHNS 0201) 5 hrs. lect., 1 hr. drill

Modern China through Literature (in translation)
This course, taught in English, is a discussion-based seminar on some of the most significant works of short fiction, novellas, and novels that tell the story of China and the Chinese from the end of the Qing dynasty to the present. Students will gain a better understanding of the history of modern China by studying the works of literature that inspired readers and provoked debate during one hundred years of social reform, revolution, war, civil war, reconstruction, cultural revolution, cultural revival, and economic growth. Our reading will include work by authors such as Lu Xun (Diary of a Madman, 1918), Zhang Ailing (Love in a Fallen City, 1944), Ah Cheng (The Chess King, 1984), Yu Hua (To Live, 1993), and, from Taiwan, Zhu Tianwen (Notes of a Desolate Man, 1999). We will consider the mainstream (socially engaged realism), the avant-garde (varieties of modernism), and popular genres (romance and martial arts), and we will look for answers to the following questions: what has been the place of fiction in China in the modern era and what vision of modern China do we find in its fiction? (No prerequisites) 3 hrs. lect./disc.

Chinese Cinema
This course, taught in English, surveys the history of movies in China since the 1930s and also offers an in-depth look at the work of: China's fifth-generation directors of the 1980s and their successors up to the present; Taiwan's new wave; and Hong Kong popular cinema, including martial arts film. Our focus is the screening and discussion of films such as The Goddess (a 1934 silent classic), Stage Sisters (1965; directed by the influential Xie Jin), the controversial Yellow Earth (1984), In the Heat of the Sun (a 1994 break with the conventional representation of the Cultural Revolution), Yang Dechang's masterpiece A One and a Two (2000), and Still Life (Jia Zhangke's 2006 meditation on displacement near the Three Gorges Dam). The course is designed to help students understand the place of cinema in Chinese culture and develop the analytical tools necessary for the informed viewing and study of Chinese film. We will look at everything from art film, to underground film, to recent box office hits. (No prerequisites) One evening film screening per week. 3 hrs. lect./disc.

Literature and Culture in Contemporary China and the Sinophone World (in English translation)
In this course we will study select works of acclaimed, popular, and/or controversial short fiction, spoken drama, and poetry from the People’s Republic of China and the post-1949 Sinophone world, primarily Taiwan. We will devote some attention to other forms of cultural production, including film and visual art. We will place a particular emphasis on the study of work by Chinese and Sinophone writers and artists who belong to non-Han ethnic minority groups (e.g., Tibetan, Yi, and Atayal), and we will explore possible answers to the question, “How is Chinese national and cultural identity created and contested in literature?” 3 hrs. lect./disc.

Documentary Film in Contemporary China
In China since the 1980s, new political and socio-economic realities, along with new technologies, created conditions for the emergence of the New Documentary Movement, the collective achievement of a group of artists with new ideas about what the form and function of nonfiction film should be. We will screen and discuss select contemporary Chinese documentary films, place these films in the context of global documentary film history, and learn methods for the analysis of nonfiction film. We will “read” each film closely, and also study secondary sources to learn about the Chinese realities that each film documents. 3 hrs. lect./screening

In China since the 1980s, new political and socio-economic realities, along with new technologies, created conditions for the emergence of the New Documentary Movement, the collective achievement of a group of artists with new ideas about what the form and function of nonfiction film should be. We will screen and discuss select contemporary Chinese documentary films, place these films in the context of global documentary film history, and learn methods for the analysis of nonfiction film. We will "read" each film closely, and also study secondary sources to learn about the Chinese realities that each film documents. 3 hrs. lect./screening

Fate, Filial Piety, and Passion in Chinese Civilization
In this seminar we will study the history of the ideas of ming (fate), xiao (filial piety), and qing (passion) in Chinese civilization. The meanings of these terms have evolved over two thousand years, but the notions of ming (one’s allotment in life), xiao (one’s duty to one’s parents), and qing (one’s sentiments or passions) have retained their central importance in China. We will discuss works of history, philosophy, literature, and film, as we consider ways in which people in the Chinese-speaking world have used these terms to express their ideas about the meaning of life and what it means to be human. 3 hrs. sem.