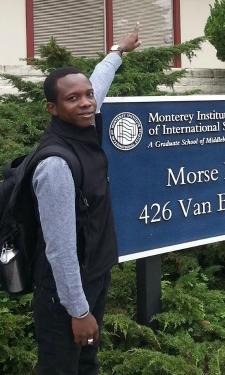 Partaking in his own “Lone Wolf” parties, which consist of laying back, listening to religious music, and drinking wine, Edwin Zoludua knows how to unwind. Coming from rural Liberia, Edwin identifies as a black, West African male. The languages he knows are English and Vai. The latter, spoken by his ethnic group, reminds him of who he is and where he is from. In his third semester at MIIS studying International Policy and Development, he embraces an international student identity. In particular, Edwin praises MIIS for its knowledgeable professors and the variance in student diversity, which prepare the students as global citizens. Edwin’s personal experience of discrimination on campus brought him to Allies at MIIS. He didn’t want to use a single situation to make judgments about MIIS. Allies at MIIS provided a platform where he could investigate further the reasons discrimination happens and how to start the conversation on campus. To Edwin, an ally is an open-minded, sensitive individual who is supportive of others and able to speak out on issues of discrimination. An ally’s work is not to make people feel marginalized, but instead to sharpen and broaden people’s understanding of racial equity. Edwin’s personal motto of “Try and fail is no disgrace” guides him and his future aspirations. As a victim of the 14-year vicious armed-conflict in Liberia, Edwin is inspired to contribute to the improvement of human conditions.