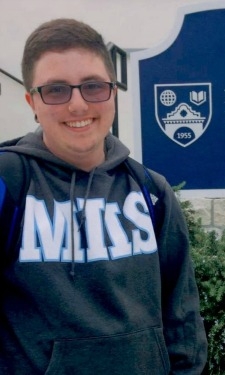 Using the mighty pen to distress through poetry and prose, Ezra Halstead is a queer transman, passionate about peace and justice. Although no longer affiliated, he grew up within the Serbian Orthodox Church near his hometown of 300 people outside of Pittsburgh, Pennsylvania. As a second semester International Policy and Development student with a concentration in Gender Power and Identity, Ezra signed up for Allies at MIIS due to his previous experience in similar initiatives at his undergrad. His college in rural Pennsylvania discussed race and racism more frequently than he has experienced at MIIS, and he wants to provoke discussion and open conversations on campus. For Ezra, the term ally is complicated. In his experience, people wear the title as a Badge of Honor, instead providing the support they claim to do. Being an ally is an everyday event. An ally must constantly be working towards and inquiring about social change. Once one stops, they are no longer an ally. While Ezra does not feel ingrained in the MIIS community at large, the Theater of the Oppressed, hosted by the MIIS P.L.A.Y. club, created a bond between him and the other participants from the MIIS and CSUMB community. His future goal of becoming a professor of Peace and Conflict Studies drives him to keep learning, passing on knowledge, and encouraging others to take action.