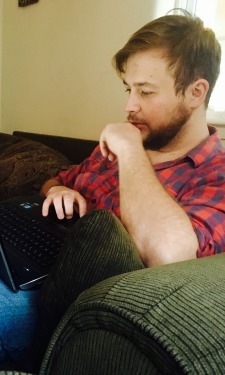 Learning to cook from his mother in Fayetteville, West Virginia led to Flynn Pollard’s 3-year stint as a professional chef. While he identifies as a straight, white, American male, Flynn is still trying to understand his identity, as he was never forced to think about it before or to justify himself. Self-described as just a dude who is good at school, Flynn relishes the way the MIIS student body is the first group of people to make him feel stupid. Flynn feels consistently humbled by his colleagues who have been through hell and back, and continue to do amazing work. Now in his third semester at Monterey and unsure where to call home, Flynn is pursuing two degrees: a Master’s in Public Administration and in International Environmental Policy, bound together with a Conflict Resolution focus. The course Introduction to Conflict Resolution taught by Professor Pushpa Iyer prompted Flynn to join Allies at MIIS. Professor Iyer challenged Flynn to learn more and find himself in a place of discomfort. He believes that he will not be effective if he is not personally challenged. An ally, to Flynn, is someone who is aware of what they say and how they affect other people. Since all he can be is an ally, Flynn doesn’t know if he is the one to define that role and he does not want to take conversation away from other people. Personal curiosity and the puzzle behind economics and social issues motivate Flynn through his studies.