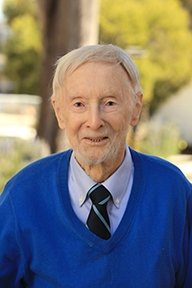 John Jenkins is Emeritus Professor of International Business. Born in Wales, he was educated internationally and speaks French and Welsh moderately well with some facility in German and Spanish. Jenkins has been a visiting professor in Australia, Canada, China (twice), England, Ireland and New Zealand and has directed management seminars in such countries as Brazil, Fiji, Ireland, Italy, Poland, Scotland and Wales. Following service in the Royal Air Force and education at Cambridge and Toronto he became a senior marketing executive with three international firms before Joining the Canadian Television Network as Director of Market Research. He subsequently re-entered academic life and established his own consulting firm, Glantegid Associates.

In 1963-1964 John was a visiting professor at the University of Toronto prior to studying at Harvard. Following Harvard he became dean of Wilfrid Laurier University’s School of Business & Economics in Ontario, Canada where he introduced both an MBA program and supported a colleague in the establishment of an undergraduate Coop program. Both became very successful. John joined MIIS as Grover Herman Professor in 1985 and was elected “MIIS Best Business School Teacher” in 1997-1998. He is the senior emeritus professor at MIIS.

John’s particular interests include all forms of marketing , political geography, the geography of language and entrepreneurship among indigenous linguistic groups. These latter have included Inuit, Metis and Indians (Canadian Arctic), Maoris in New Zealand, Pacific Islanders, Aboriginals in Australia, Native Americans in the U.S, Irish, Romansh-speakers (Switzerland) and Ladins in the Italian Dolomites. Jenkins has authored published articles and papers on entrepreneurship in these communities and has served on the editorial board of an academic journal devoted to this topic. He is an active supporter of Native American rights.

John has an MA in Political Geography from Cambridge and an MBA from the University of Toronto. He additionally holds doctorates in Business Administration from Harvard and Political Geography from Oxford. His Oxford doctoral thesis was selected for publication by the Clarendon Press. John is the sole author, co-author or a major contributor to six books in both his disciplines, two marketing games, 36 business cases and 47 marketing and entrepreneurship articles. He first came to MIIS in 1985-6 as Grover Hermann Visiting Professor. John considers MIIS to be a “warm, welcoming academic community with a dedicated faculty and staff and wonderful young people who want to help change the world for the better.”