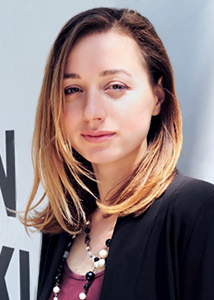 Marina Kurikhina is a Russian born Art Historian/Curator, with a design degree from Central Saint Martins at London University of Arts and Masters from Sotheby’s Institute. Her master’s thesis was on the use of cultural currency in political imagery for international relations in 18th century Russia.

After graduating Marina worked for Magnolia, a non-profit foundation based in London and Mexico City, that focused on citizen’s diplomacy through cultural projects and exchanges.

During the past decade Marina continued to work in an international contemporary art scene with major museums, institutions and art fairs on projects in London, New York, Sao Paolo, Mexico City, and Los Angeles.

Marina’s research interests include connections between art, psychology and neuroscience at the Esalen Institute.