Next Application Deadline April 1 Get Info

Advance your career in global security. Our participation in the Yellow Ribbon Program and other military benefits makes your degree an affordable investment. Study online or in person.

Our Master of Arts in Nonproliferation and Terrorism Studies (NPTS) gives you specialized knowledge and skills that will distinguish you from other graduates. Learn advanced strategies to stop the spread of weapons of mass destruction (WMD), counter terrorist threats, and prevent financial crimes.

Complete Your Degree in 4 Semesters

Use Your Military Benefits

We offer full tuition coverage for qualifying veterans and their eligible dependents through the Post-9/11 GI Bill® and the Yellow Ribbon Program. We also offer preferential scholarship consideration to those who are not eligible for these benefits. We are committed to making your education affordable and helping you take this next important step in your career.

Active duty military, veterans, and their dependents make up more than 5 percent of our students, so there’s a strong sense of community here.

Your career and academic advisor has significant experience helping veterans land their dream jobs. You’ll be prepared to work at international organizations; government agencies, including the intelligence community (IC), think tanks, and NGOs; and a range of private-sector employers, including those in the nearby Silicon Valley tech industry.

One Year After Graduation

Our alumni are working as analysts, associates, and program managers, in leading organizations including the following:

Build your expertise in these areas:

What Our Alumni Have to Say 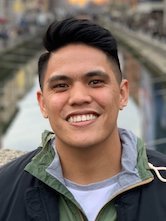 Institute Advantage: Language studies helped me tremendously, as I ended up working for a Japanese company initially. The Center for Advising and Career Services team, especially Elizabeth Bone and Bryce Craft, helped me with salary negotiation, searching through the alumni database for potential contacts, and so on. The Financial Crime Management specialization also helped me hit the ground running in my new field.

Story: How I Got Hired