Support the Institute Give Now

The Middlebury Institute has received a bequest in excess of $4.5 million from a trust established almost 50 years ago by Samuel F. B. Morse, the legendary founder of Pebble Beach.

The gift will establish a special fund in Morse’s name that will support student scholarships, academic programs, and other priorities of the Institute well into the future. It is the largest single gift in the history of the Middlebury Institute.

Always the visionary, Morse created a trust that one day would transfer his fortune and fulfill his philanthropic vision. After his death in 1969, the trust was to provide income to his heirs until the passing of his longest living child, at which time the remaining funds were to be divided between three educational institutions—the Middlebury Institute, Yale University in New Haven, CT, and the Stevenson School in Pebble Beach. In April, his youngest daughter, Mary Morse Shaw, passed away at the age of 97, triggering the distribution of the trust.

Charles Osborne, author of Boss: The Story of S.F.B. Morse, the Founder of Pebble Beach, says his grandfather “felt that any success he had started with the schools he attended.” He had grand ideas about his adopted home and “his dream for the Peninsula was to make Pebble Beach a sportsman’s paradise and for Monterey to be a center of higher education.”

“We are honored and deeply grateful to Mr. Morse and his family for believing in the Institute’s mission during its early years and for planning to provide generous support well into the future,” said Middlebury President Laurie L. Patton. “While he could only imagine the possible future growth of our then small school, Mr. Morse believed in the power of education and, as a visionary and innovator, understood the importance of language as a means for truly understanding other cultures.”

Samuel Finley Brown Morse, also known as the “Duke of Del Monte,” grew up on the East Coast and attended Philips Academy, Andover and Yale where he was captain of the undefeated 1906 football team and voted most popular in his graduating class of 1907. After graduation, Morse was ready to seek new opportunities in the West, and quickly embraced the Monterey Peninsula, where he would make his mark. Initially tasked with liquidating properties along the Pebble Beach coastline for the Pacific Improvement Company, he instead saw the potential and myriad possibilities along the rugged coastline to shape a community, which ultimately included the now legendary golf course. In his book, Osborne wrote that his grandfather “rallied against the forces of ugly, tasteless growth.”

Morse was an artist—a painter—who loved sports and traveled the world. As Osborne described him, “He blended old and new, bridging the romantic notion of the cowboy days of the Old West and the modern man of enterprise.” Morse left behind a lasting legacy on the Peninsula, including the preservation of expansive coastal property. Local appreciation for his legacy is evident in the many streets and buildings named in his honor, including the S. F. B. Morse Building on the Middlebury Institute’s campus in downtown Monterey. 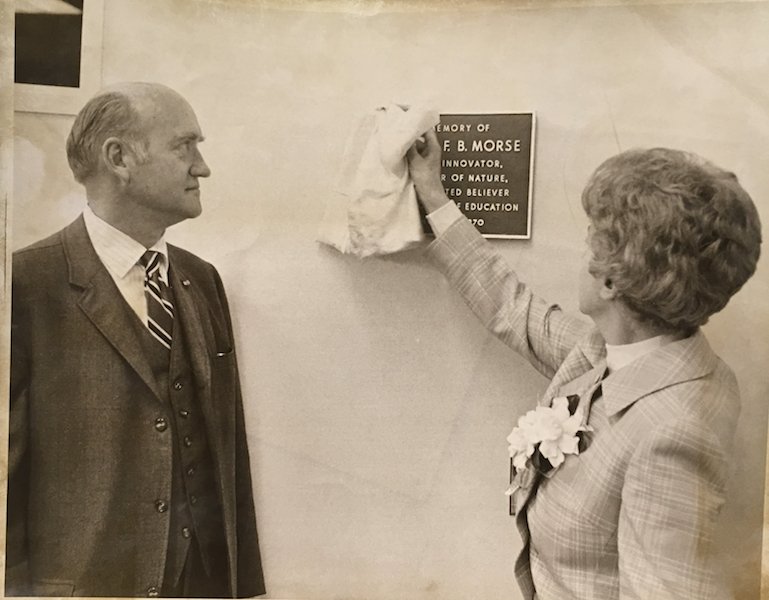 From his world travels, Morse understood changing world dynamics would make language and cultural understanding increasingly valuable. This worldly perspective made him an early supporter of the Institute, advising his friend and one of the early academic leaders of the small school, Dr. Remsen Bird. As the Institute blossomed, he underwrote the loan to purchase the former city library, what is now the Segal Building. In his role as president of the Monterey Foundation, he supported grants to the Institute. After his death, his family remained involved with the school during its formative years.

“When he was approached by the Institute at its inception he understood that the charter was to provide an education for those who wished to be in the foreign service or do business abroad and who wished to polish their language skills,” Osborne said of his grandfather. “The Institute has done that and more and continues to do so. S.F.B. would be proud of the institution that has grown to be such an important part of Monterey, and of what it has contributed to the world.”

With its share of the S.F.B. Morse Trust, the Middlebury Institute will establish the Samuel F. B. Morse Fund which will be invested as part of the Middlebury endowment to generate a generous funding stream for Institute priorities. The fund will help the Institute continue its core mission of preparing students to lead engaged, consequential, and creative lives, contribute to their communities, and address the world’s most challenging problems. “This fabulous gift will be applied to our highest priorities—student scholarships and immersive learning opportunities—and also used to explore new avenues and approaches in teaching and learning,” said Patton. “This visionary trust is one more way Mr. Morse will leave his indelible mark on the Peninsula, a community he not only envisioned, but helped to build.”