A public address by the Honorable Richard V. Spencer, Secretary of the Navy capped a day of “MIIS/NPS Security Dialogue,” featuring the research and work of students and faculty at the Middlebury Institute of International Studies (MIIS) and the Naval Postgraduate School (NPS) on Saturday, November 16, 2019.

Secretary Spencer told the audience of more than three hundred community members that one of his first stops outside of Washington, D.C. after taking office close to three years ago, was to Monterey. He called the collaboration between the Middlebury Institute and NPS the “posterchild of cooperative learning to keep us on the cutting edge of this fast-changing world we have today.”

“Both places, I think, are uniquely equipped to address the security challenges of the 21st Century,” President Patton told the evening audience, adding that the histories of the Middlebury Institute and the Naval Postgraduate School have been “intertwined from early on.” Patton spoke with enthusiasm for the renewed collaboration between the two institutions, including a partnership that allows several students from each school to take courses at the other, making the most of ”distinctive strengths,” and expanding options. 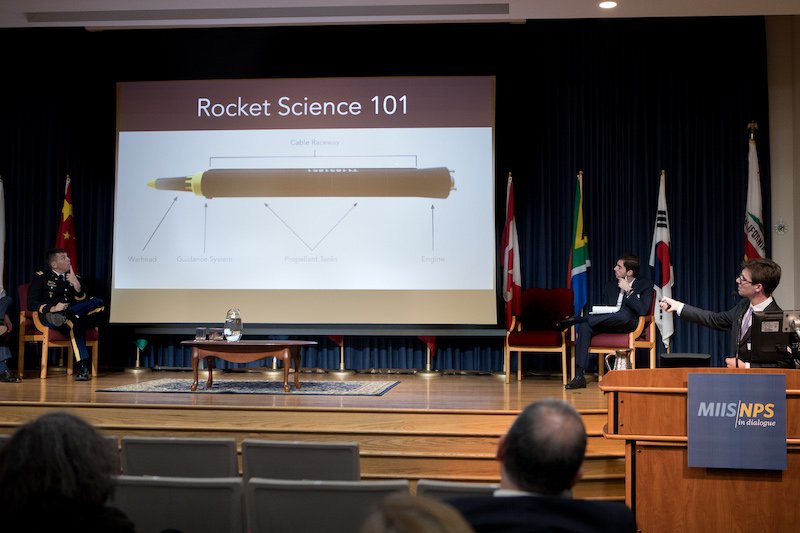 On Saturday afternoon, four students from the Middlebury Institute and two NPS students presented their research on the topic of “Inhibiting the Spread and Use of Nuclear, Biological, and Chemical Weapons.” During the first session Cyrus Jabbari MANPTS ’20 shared his research on the question of “Answering Threats with Threats: Are Iranian Biological Weapons Fears Driving Offensive Development?” Middlebury College student Jake Hulina ’20, who is studying away for a semester at the Institute and taking classes in the Nonproliferation and Terrorism Studies degree (NPTS) spoke about his “Open Source Analysis of a Houthi Missile System.” Major Joshua Nolan shared his research on “Weaponized Fentanyl: Rethinking Chemical Weapons Proliferation,” and all three participated in an engaged discussion with audience members facilitated by NPS faculty member Dr. Tristan Volpe.

The second session of the day featured Jaewon Oh MANPTS ’20, a Pickering Fellow, and her study of “Authoritarianism vs. Liberal Democracy in the Development of Technology,” and her classmate Nomsa Ndongwe MANPTS ’20, a former Zimbabwean diplomat, who shared her research on “Identifying the Pathogen: Reinvigorating the Biological Weapons Convention.” They were joined by Major Whitney Cissell who talked about her research into “U.S. and NATO Deterrence Strategy: Countering Russian Aggression.” Professor Jeffrey Knopf, chair of the NPTS program at the Institute moderated the debate and Associate Professor Philipp Bleek gave closing remarks.

Three events have been planned in the MIIS/NPS Security Dialogue series for 2020. On February 4, the topic will be the use of chemical weapons in Syria and its implications for U.S. policy. A week later, on February 11, the discussions will be about what lessons can be learned from organized crime for disrupting illicit nuclear procurement networks. Finally, on March 31, there will be an event dedicated to the topic of using technology to investigate nuclear and missile programs worldwide. For more information about upcoming events visit the MIIS/NPS Security Dialogue page on our website.