Support the Institute Give Now

The Jan Knippers Black Fund for Human Rights was launched with a lively and inspiring celebration in a packed Irvine Auditorium at the Middlebury Institute on Friday, September 7, 2018.

The new fund will support student internships with Amnesty International USA, a human-rights-focused speaker series and an award for alumni who, in Prof. Black’s words, “have done particularly outstanding work related to human rights.”

Professor Jan Black has been the anchor of human rights specializations at the Institute since she joined the faculty 27 years ago. She has mentored countless students who have become professionals working for the promotion and preservation of human rights. Many of them remain in close contact with their mentor and friend and attended the event or sent messages of support for the launch on Friday.

She would go on to pursue human rights in her academic research and is a prolific author as well as a tireless advocate for the oppressed, the downtrodden, and the marginalized.

The evening’s celebrations began with a musical performance by Translation, Interpretation, and Language Education Dean Laura Burian and Juan Sanchez. It was a fitting opening for a celebration honoring Black, whose first career was in music “as something of a child prodigy sidekick” to her father, affectionately known as Tennessee’s “Singing Senator,” as she describes in a 2017 Communiqué interview. 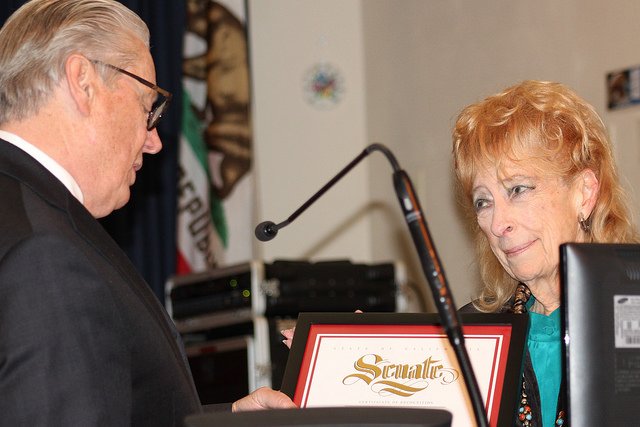 “For those of you in the audience who had the privilege of learning from Jan, and I count myself in that crowd, you will understand what I mean when I say that Jan is a little bit like the fairy godmother of human rights,” shared Margaret Huang, executive director of Amnesty International USA in her address, “you never know where she is going to show up. She will always champion those who need her - and her outfits are fabulous.” Huang said it was both an honor and a pleasure to celebrate Black’s remarkable leadership on human rights. “There is no question that Jan has covered the most far-fledged corners of our world, shaking her fist at dictators and authoritarian regimes and inspiring young people to take action.”

California Senate Majority Leader and Middlebury Institute Professor-on-Leave Bill Monning acknowledged the leadership of Professor Black on the Boards of Directors of Amnesty International, the United Nations Association, Global Majority, the Peace and Justice Center and the Executive Board of the State Democratic Party. “I have had the honor and privilege of knowing Jan as a friend, as an academic colleague here at the Institute, and as an ally on many fronts.” Monning presented Black with a California State Senate Certificate that recognizes the establishment of the Jan Knippers Black Fund and the importance of her leadership through the years.

Dean of the Institute Jeffrey Dayton-Johnson paid tribute to his friend and colleague via video, as did Ambassador Elayne Whyte MAIPS ´93, a former student and great friend of Black’s. Whyte said that when she took Professor Black’s class she discovered “this warm person who at the same time was tough when she graded our papers,” who “continuously encouraged us to go beyond the textbook to understand reality, to talk to the people and to see with our own eyes and go directly to the source – and to Jan the source is the people, living their lives throughout the world.”