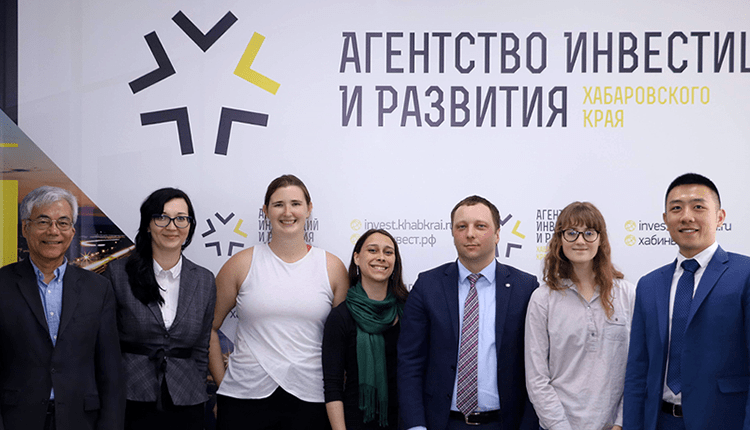 The research trip to the Russian Far East was a fully funded experience that took successful applicants to Vladivostok, Khabarovsk, and other cities.

Local hosts at the Far Eastern Federal University in Vladivostok and the Economic Research Institute in Khabarovsk extended a warm welcome and facilitated the delegation’s meetings with faculty, students, journalists, and other local experts. The four students conducted interviews concerning their respective research topics. In preparation for this trip, the students held five seminar-format sessions with Professor Akaha to discuss Russia’s relations with China, Japan, and Korea as well as developments in the Russian Far East, which plays a unique role in bilateral and regional relations.

During their stay in Vladivostok from March 25 to 27, the delegation met with Professors Artyom Lukin and Sergey Sevastyanov of the Far Eastern Federal University. They discussed relations between Russia and China, Russia and Korea, and economic development initiatives in the Russian Far East, including free economic zones, Territories of Advanced Development (TORs), and the Hectare in the Far East Program.

They also enjoyed meeting several students studying international relations in the university’s School of Regional and International Affairs. They met with Martin Tate of the agribusiness enterprise Tate Agro Group, and they discussed various government initiatives to stimulate economic development in the region. The delegation also visited the Russian-Japanese joint venture JGC Evergreen, LLC, where a representative of the agribusiness enterprise, Roman Matvienko, showed them a modern eco-friendly agricultural facility. In addition, the visiting group met with Oleg Zhunusov, a well-known journalist with business daily Zolotoy Rog, who told them about current economic and social developments in the Russian Far East, including the presence of North Koreans in the region. The delegation also heard about Advanced Special Economic Zones (ASEZ) and Free Port Vladivostok (FPV) from Sergei Skaliy of the Corporation of Far East Development.

The group took a night train from Vladivostok to Khabarovsk on the last leg of the Trans-Siberian Railroad. In Khabarovsk from March 28 to April 1, the delegation held a roundtable discussion and individual consultations with senior researchers of the Economic Research Institute, including P. Goryunov, S.N. Leonov, A.G. Isaev, E. A. Zaostrovsky, Denis Suslov, and G.I. Sukhomirov. They covered topics ranging from special economic zones to investment climate in the Russian Far East (RFE), Russia’s new economic programs, North Korea’s involvement in regional governments, and new agriculture policy in the RFE. 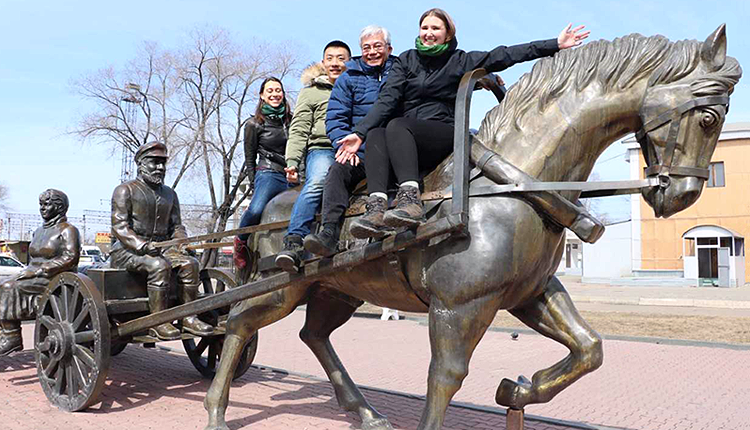 The group also met with Natalia Pastukhova of the Far Eastern Research Institute of Agricultural Production Complex (topic: Russia’s new agriculture policy, Hectare in the Far East Program); Alexander Kapishnikov and Vladimir Kucheryavenko from the Russian Foreign Ministry’s representative office in Khabarovsk (topic: Russia’s relations with North Korea and the impact of economic development in the RFE on North Korea); Sergey Baushev, Maria Grishinkova, Svetlana Naidenkina of the Agency for Investment and Development, Khabarovsk Krai (topic: economic development initiatives in the RFE, including free economic zones, Territories of Advanced Development, and the Hectare in the Far East Program); and Ivan Semiletkin and Antonina Yarskaya of land development enterprise Prada Col, Ltd. (topic: economic development initiatives in the RFE). The delegation enjoyed a day-long excursion to Birobidzhan, the administrative center of the Jewish Autonomous Oblast bordering China.

Despite the deteriorating U.S.-Russia relations – or precisely because of them – it is important to keep people-to-people channels of communication between the two countries open, and this visit was an opportunity for exchanging information and views on Russia’s place in the world. The members of the delegation learned much about the Russian Far East from this visit to the region and from engaging face-to-face with local experts. For this, they are very grateful to the Monterey Initiative in Russian Studies.

Topic of Study: Developments in agriculture in the Russian Far East

This trip provided me with an extraordinary opportunity to see firsthand how Russia’s new agricultural policies are shaping the Far East. Through visiting farm sites and speaking with employees and directors, as well as regulators and experts, I gained insight that desk research alone could never provide. The highlight of my trip was our visit to JGC Evergreen, a produce company employing hothouses and hydroponics to grow fresh vegetables year-round for sale in local markets.

My recent week-long trip to Vladivostok and Khabarovsk marks my first time to the Russian Far East. Compared to other parts of Russia, the region stood out to me as both similar and unique. Given the immense distance between the Far East and other parts of Russia, it was perhaps surprising how much the region reminded me of my prior experiences in Russia. Yet the Far East has its own distinct attributes, stemming in part from its proximity to Asia. To give just one examples: Russian student in the region tend to study Chinese, Japanese and Korean, while many of the international students at the Far Eastern Federal University come from these neighboring countries. My research focused on regional economic development initiatives, particularly the creation of 18 new Territories of Advanced Development (TADs). The government designed these special economic zones with extremely favorable tax and regulatory regimes to promote export-oriented industries, hopefully spilling over to spur wider economic development in the region. We visited several of the territories and spoke with current residents. We also met with government administrators responsible for the territories and experts at the Economic Research Institute of the Far Eastern Branch of the Russian Academy of Sciences. Although most agree that it is early to definitively speak about the success of the initiative, these meetings broadened my understanding of the current challenges to using the TADs as a tool for broader regional development. Like many of the experts with whom I spoke, I am eager to see if they yield positive results in the coming years.

During the Russian Far East research trip, I was able to meet not only experts from academia, but also policy makers from Russian Ministry of Foreign affairs. I was able to conduct interviews and hear their insight regarding my research topic on how we can incentivize DPRK to shift its national priority with “Carrot” policy. Specifically speaking, I had a better understanding of the current economic development programs in RFE, and to what extent Russia and DPRK are still cooperating under sanctions.

Topic of Study: Investment climate in the Russian Far East

The research trip to Vladivostok and Khabarovsk helped me gain firsthand, experiential knowledge of the Russian Far East. Even though you may read about something extensively in a classroom environment, the reality can be quite different. My research focuses mainly on the investment climate of the Far East and being able to speak one-on-one with academics, students, experts, investors and business owners allowed me to more deeply understand what it is really like to work in the Far East. This was a once in a lifetime opportunity that I would recommend to anyone looking to further their Russian language skills and understanding of the region as a whole. I particularly enjoyed our last excursion to Birobidzhan in the Jewish Autonomous Oblast. The experience was unique. I look forward to one day returning to the Far East. The region is on the cusp of transformation, and I am honored to have seen a snapshot of what is to come.

Four students will conduct field research in Vladivostok and Khabarovsk in March 2018.