The Center for the Blue Economy’s work leads to notable successes in the field.

Collaboration, community activism, and many individuals and organizations working tirelessly help to advance these exciting developments in environmental protection. 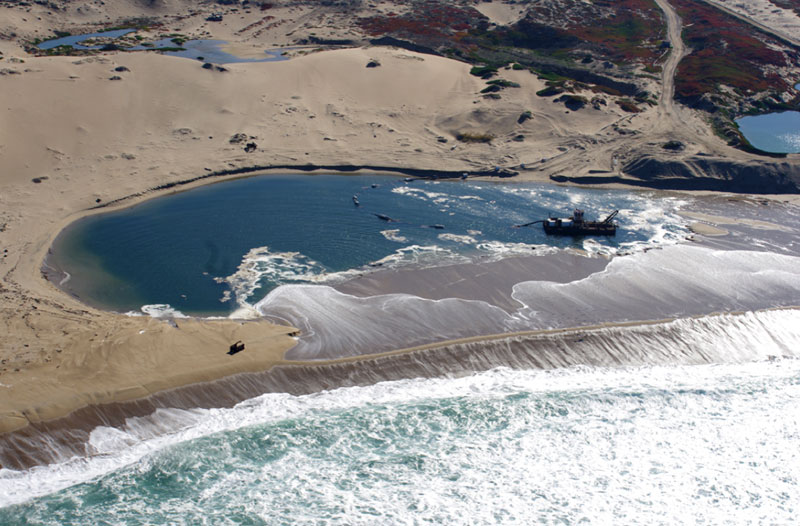 Closure of the Last Coastal Sand Mine in the United States

July 2017: The CEMEX sand mine located on the Monterey Bay is the last coastal sand mine in the United States. It opened in 1906 in response to construction needs after the great San Francisco earthquake. They extract roughly 250,000 cubic yards of sand annually, equivalent to a block of sand 10 feet high, 100 feet wide, and over one mile long each year. The beaches to the south are losing sand faster than anywhere else in the state. In April of 2017, the Center for the Blue Economy wrote a letter to the California Coastal Commission and the State Lands Board outlining the negative economic impacts of the sand mine. This followed many years of activism and efforts from the community to bring this issue to the forefront. In July of 2017, the California Coastal Commission unanimously agreed to settle with CEMEX, allowing them three years to end their sand extraction. It was a long battle, and the Center for the Blue Economy is glad to have played a part.

June, 2016: The U.S. Space, Science and Technology Committee voted to allocate $1.5 million to NOAA’s National Ocean Service to develop a plan for Ocean Satellite Accounts (a new allocation), and $10.5 million was given towards NOAAs research and planning regarding Ocean Acidification (flat funding from the prior year). You’ve heard of “Ocean Satellite Accounts,” right? No? Well, that could be because they do not exist—yet. This new allocation is a step toward their creation. Market sectors such as healthcare, energy, and agriculture have special satellite accounts monitored by the U.S. Bureau of Economics Analysis that provide important details of those industrial sectors to more accurately estimate their values. There is no such thing for the oceans although, the Ocean Economy in 2013 comprised a larger share of the U.S. economy than other major natural resource industries, including farming, food products, oil and gas extraction, and forest products. The Center for the Blue Economy has partnered with Woods Hole Oceanographic Institute to help guide NOAA in the creation of the first official U.S. Ocean Satellite Accounts.

September 2014: Dr. Judith Kildow (Director of the National Ocean Economics Program) and Dr. Jason Scorse (Director of the Center for the Blue Economy) produced a report for the Sierra Club titled The Potential Economic Impacts of the Proposed Central Coast National Marine Sanctuary, which earned widespread local support. If approved by NOAA, this will be the first new marine sanctuary in California in over 20 years, and would protect some of the state’s most precious marine resources that fall outside of the existing sanctuary system. With large increases in tourism visitation rates to museums and cultural sites throughout the U.S., the Chumash Sanctuary has the potential to provide a large economic boon to the regional economy because of its range and diversity of coastal Native American historic sites. In addition, the Sanctuary proposal has provided an opportunity for many of the Chumash tribes to work together for a common purpose, and it has helped to energize cooperation in ways that have surprised even some of its most ardent detractors. The Center for the Blue Economy’s research demonstrated that the Sanctuary is a low-risk/high-reward venture for the Central Coast communities. The San Luis Obispo and Chumash communities are still actively seeking this designation.

The Center for the Blue Economy report “The Economic Effects of Outer Continental Shelf Oil and Gas Exploration and Development in the South Atlantic Region:  Issues and Assessment,” influences Obama administration to reverse course

In early 2015, the Obama administration announced a draft five-year plan to allow offshore oil drilling in the southeastern Atlantic seaboard, in which the government would sell leases for oil and gas development in federal waters from 2017 to 2022. The decision was prompted in part by a report from oil-industry backed report by Quest Offshore Resources Inc., which claimed huge economic benefits from the drilling. Late in 2015, the Center for the Blue Economy created a study for the Southern Environmental Law Center that countered those claims. Many news stories cited the study as well as statistics from the National Ocean Economics Program in opposition to the decision. On March 15th, 2016, President Obama’s Department of the Interior released the final draft of the five-year plan, which does not allow offshore oil drilling in the southern Atlantic. This was a huge victory for coastal communities at the time, however this decision has now been threatened by the current administration. The Center for the Blue Economy and National Ocean Economics Program research and data is still often cited in the fight against offshore oil drilling.