On Wednesday, April 14, 2021, in one of the largest and certainly most timely Ocean lobbies in U.S. history, over 1000 people were mobilized from more than 30 states and territories.  Meetings were held with 107+ Members of the House of Representatives and their staff, and 33+ Senators and staff.  Over 150 virtual meetings took place on Ocean Climate Action Lobby Day!  The coalition (many of whose members had never visited with their elected representatives before) sent a clear message to our national policymakers:  you cannot solve the climate crisis without ocean health, and ocean health is key to solving the climate crisis.

More than two years in the making, with co-convenors Blue Frontier and Center for the Blue Economy at the Middlebury Inst. of Intl. Studies and a wide range of stakeholder input, the Ocean Climate Action Plan provided a framework for many of the day’s key legislative asks.

Our Welcome & Kick Off started at 9:00 am EST, with the renowned Dr. Sylvia Earle, Explorer-in-residence with National Geographic, and founder of Mission Blue and the Sylvia Earle Alliance. 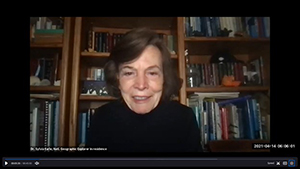 Dr. Earle stressed the ocean climate connection, reminding us that once we thought there was nothing humans could do that would impact the vast ocean or the climate cycle, but now we know, “we have the magnified power to alter the nature of nature.”  Just as we can do harm, we can find solutions to help.  “But it’s not just knowledge that will solve the problem:  it’s acting on what we know. ” Dr. Earle reminded us.

Senator Ed Markey of Massachusetts greeted us on video.  As co-author of the Green New Deal, he has long been an environmental advocate as well as an Ocean champion.  He spoke eloquently and forcefully about the need to address climate change. 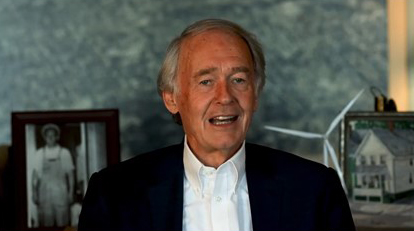 Senator Markey spoke of the need to “restore our seagrasses, mangroves and kelp forest and place these ecosystems in the national toolkit for addressing carbon reduction.”   He also stressed the need for electrification of maritime ports, protecting and investing in the livelihoods of the fishing community, and the need to involve frontline communities:  “We have seen how people of color in low income communities face disproportionate impacts in the midst of climate and public health emergencies…We must not only consult with affected members on the ground but invest in sustained support for those overburdened communities.”

Following Senator Markey’s remarks, Congressman Raúl M. Grijalva of Arizona joined us live from his office.  Congressman Grijalva is the Chair of the House Natural Resources Committee, and introduced the Ocean-Based Climate Solutions Act in the last Congress and will be re-introducing a new version very soon.   Co-sponsorship and passage in the House, as well as a companion bill in the Senate were the top priorities for Ocean Climate Action Lobby Day. 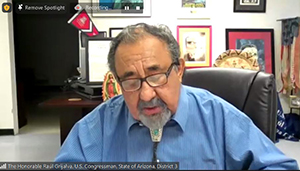 Congressman Grijalva reminded us that every state, even inland states like Arizona have skin in the game when it comes to ocean health and climate change.  “If we’re going to meaningfully address the climate crisis, we need grassroots organizers like you weighing in and supporting us every step of the way, bringing the passion, the urgency, the generational imperative and the science to my colleagues in Congress in support of the Ocean-Based Climate Solutions legislation,” the Congressman said.  He announced an additional bill that addresses single use plastic by asking the producers to pay a fee to discourage continued production of disposable plastics that are choking the marine environment.

Our final speaker was Congressman Joe Neguse of Colorado, a champion of the environment and co-sponsor of the Ocean-Based Climate Solutions Act.  Congressman Neguse is also Chair of the National Parks, Forest and Public Land subcommittee and the Select Committee on the Climate Crisis. 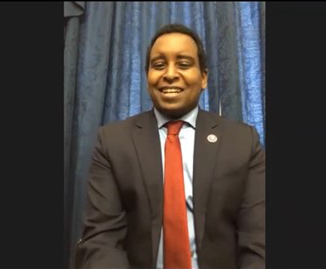 He greeted us warmly, and made it clear that he wants to leave a better world for his three-year old daughter, and for all future generations.  “So much of our work here in Washington is ultimately connected to ensuring that we leave the planet in better shape than we found it,” Congressman Neguse said.   His message sent the Ocean Climate Action Coalition members off with a sense of hope, and urgency.

After an inspired Hill Day welcome our citizen activists led by their State and Territorial leads and co-chairs introduced the key legislative issues to their representatives.  Time was also given for individuals to bring up issues of importance to them, and for our elected representatives and their staff to give their perspectives.  The main asks for the day included:

Youth including the Heirs to Our Oceans organization and others were an outspoken force throughout the day, and some made clear that they did not support all the initiatives in their entirety, but were absolutely committed to fighting climate change and restoring a healthy Ocean for their future as well as advocating for inclusion of all voices from marginalized communities in the decision making process, a key component of the policy recommendations of the Ocean Climate Coalition.  All the participants expressed appreciation for the youth voices and involvement in the day.

We closed the day with a celebration and Report Back gathering, going state by state and territory beginning with Alabama and ending with Wyoming.  The energy was electric.  People were so thrilled to have spoken to their representatives on all sides of the aisle (Republicans, Democrats and Independents).  Included in the closing celebration were two youth speakers Charley Peebler (16 years old) and Bronson Kainoa Azama (18 years old),  who stressed that youth, along with marginalized, and Indigenous voices must be included in the decision making process before bills such as the Ocean-Based Climate Solutions Act can move forward in a way that represents the will of all the people of the United States.

There are so many stories to tell from Ocean Climate Action Lobby Day 2021.  One story that stood out for me was from the Georgia delegation.  That delegation came together just ten days prior to Lobby Day, and was entirely youth-led.  Everyone in that delegation was 18 years old or under, including voices from middle school aged activists and even a speech from a determined kindergartner who held a poster about protecting the ocean!

Another noticeable factor for me was that so many students and alumni of the Middlebury Institute of International Studies International Environmental Policy program were involved, either leading state delegations, or working behind the scenes.  For students studying the intersection of policy, science, and advocacy, Ocean Climate Action Lobby Day 2021 was a unique opportunity to see theory turned into practice.

Final observation:  there were so many “first time lobbyists” in the crowd (myself included) who left the day fired up and ready for more! 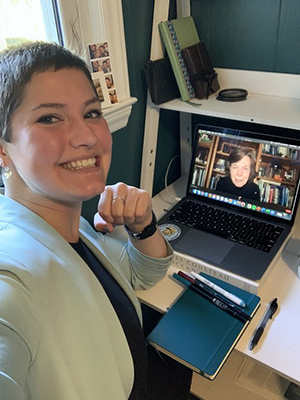 It was an empowering and inspiring day of action, but our work will need to continue in order to turn the tide.

We look forward to continuing our work with this amazing coalition of ocean climate activists into the summer of 2021 and beyond!

4.28.2021 update:   The Ocean Climate Action Plan and Lobby Day are already influencing the national conversation by aligning US climate goals with new blue economic development.  From Biden’s 30GW of offshore wind by 2030, to an emphasis on equity based coastal and freshwater shoreline restoration, the framework developed in the Ocean Climate Action Plan is now mirrored at the highest levels of government.  More action to come over the summer of 2021!