Building on the successful outcomes of an earlier fruitful partnership on advancing women in STEM, CNS and AFRICSIS held a two-week virtual intensive course on WMD Nonproliferation and Security for Women in STEM from January 25 – February 5, 2021.

Female professionals made up 92% of course participants and came from a wide range of backgrounds that included biology, chemistry, physics, nuclear safety and security, and medical, among others. Participants’ affiliations were comprised of government and regulatory bodies, medical and research institutions, think tanks, academia, and others. 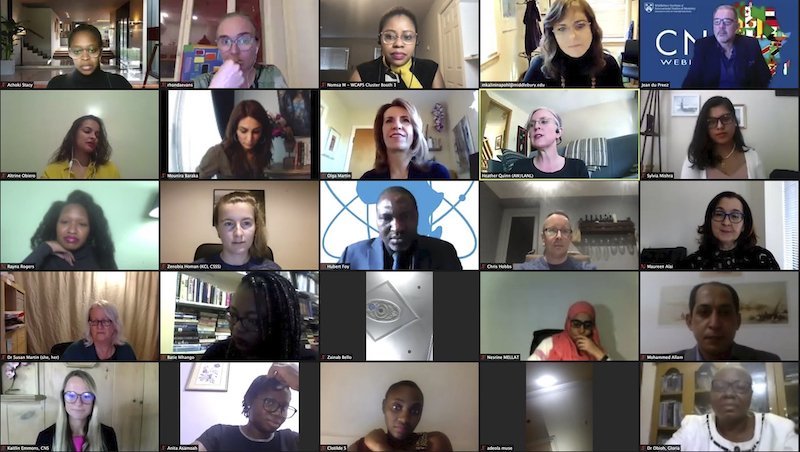 The course program covered a range of topics — from the overview of weapons of mass destruction to peaceful uses of nuclear energy, to nonproliferation tools and mechanisms, to chemical, biological, nuclear, and radiological threats in the context of Africa. Course speakers included over 50 international and regional experts (more than half were women) including ambassadors from Costa Rica and the United States, a Nobel Prize Laureate (International Campaign to Abolish Nuclear Weapons), and senior-level officials from a number of international organizations, including the International Atomic Energy Agency (IAEA), Comprehensive Nuclear-Test-Ban Treaty Organization (CTBTO), Organization for the Prohibition of Chemical Weapons (OPCW), African Commission on Nuclear Energy (AFCONE), International Science and Technology Center (ISTC), and World Institute for Nuclear Security (WINS). Other course speakers included experts from CNS (Jean duPreez, Ferenc Dalnoki-Veress, Miles Pomper, George Moore, Robert Shaw, and David Schmerler), Elena Sokova and Ingrid Kirsten from the Vienna Centre for Disarmament and Non-Proliferation (VCDNP), and representatives from the Stimson Center, Nuclear Threat Initiative, and other universities and organizations. A full list of participants and speakers can be found here.

A notable presentation was a panel discussion on the Treaty on the Prohibition of Nuclear Weapons (TPNW). Moderated by CNS Director Dr. William Potter, the panel featured MIIS alumna (MAIPS ‘93) Ambassador Elayne Whyte Gómez of the Costa Rican Ministry of Foreign Affairs, Ms. Beatrice Fihn of ICAN, and Dr. Rebecca Davis Gibbons of the University of Southern Maine. Another panel discussion of particular interest to the participants was on the future of nuclear energy in Africa, as many of their countries are embarking on nuclear energy programs to meet energy demands stemming from population and economic growth. The panel was led by Ms. Ntebatse Matube of Necsa and the Vice-President of WiN Global Africa and featured senior officials and experts from AFCONE, Ghana, Nigeria, and CNS.

Conversations on promoting women and diversity in security and STEM played a prominent role during the course. A panel on promoting peace and security through diversity and gender equality led by Ambassador Bonnie Jenkins of Women of Color Advancing Peace and Security (WCAPS) and Ambassador Laura Holgate of Nuclear Threat Initiative (NTI) ignited a much-needed discussion among participants on challenges faced as women working in STEM and security fields and ways to break such barriers. The gender-focused discussion concluded with presentations by representatives from the World Institute for Nuclear Security (WINS) and OPCW on advancing women in nuclear and chemical security. During the post-course survey, over half of participants stated that the course enhanced their understanding of gender equality and importance of gender equity awareness in their workplace.

Several opportunities were also included in the course to supplement speaker presentations and panel discussions. One optional event available to participants was the “Strengthening the Comprehensive Nuclear-Test-Ban Treaty and its Verification Regime” hosted by the VCDNP. In addition, daily virtual lounge sessions were held after the course that afforded an informal interaction space where participants were able to network within the cohort, share ideas and reflections on course topics, and dive deeper into relevant issues. A few of the virtual lounge sessions featured guests who shared their work in promoting girls and women in STEM. Guests included CNS experts Ms. Sarah Bidgood and Ms. Masako Toki, Prof. Rabia Said, and Ms. Mara Zarka of VCDNP and CRDF Global. Two small break-out group interactive exercises fostered powerful and insightful discussions where participants reflected on prompts relating to CBRN threats in Africa and opportunities for overcoming challenges faced by women working in CBRN fields. Participants observed that while some of these threats and challenges are unique to the African continent, they are also universal and need to be addressed collectively by the international community.

The course received exceptional feedback from participants who found it inspirational and helpful for advancing their careers. One participant wrote “the course made me believe more in myself.” Another participant noted that the discussion of gender awareness during the course showed to that “men and women can have equal opportunities and responsibilities.” Finally, one more participant shared that “as many women here juggling babies, after coming home from work, […] talking about disarmament, nuclear power, WMDs, and policy with other specialists from around the world, we are already pioneers pushing past gender norms in Africa. When you train a woman you train a nation.”

The continuing successful partnership between CNS and AFRICSIS, founded by MIIS alumnus (MAIPS’10) Mr. Hubert Foy, allows for a remarkable contribution and continuous support to worldwide efforts in promoting women in STEM in general and training a new generation of WMD nonproliferation and security specialists.

The course would not have been possible without the support of the Norwegian Ministry of Foreign Affairs, Carnegie Corporation of New York, and the John D. and Catherine T. MacArthur Foundation.